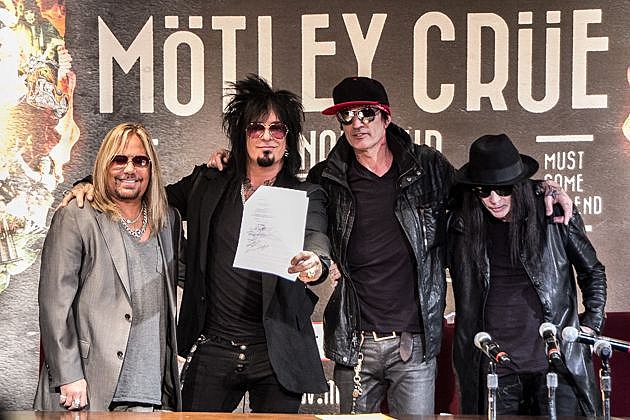 Motley Crue have been saying their touring farewells to fans around the world over the past year-plus, but tonight (Dec. 31) marks their final concert as they set up to take the stage one final time. There’s no doubt that the finale at the Staples Center in Los Angeles is one hot ticket and sadly not everyone will be able to get in. But for fans unable to attend, the next best thing has been announced. The band will be shooting their final performance at the Staples Center for an upcoming full-length concert film.

The band has enlisted Christian Lamb, who has worked with Madonna in the past, to direct the concert portion of the film, while Jeff Tremaine, the director of the band’s upcoming film based on their The Dirt biography, will handle the documentary segment of the film.

In addition to the live performances of your favorite Motley Crue hits for the final time, viewers will be treated to exclusive interviews and behind-the-scenes footage from the final week of the tour. The group has already played a pair of Staples Center shows this week to collect some of the footage.

The band members signed a binding legal document prior to the announcement of “The Final Tour” stating that this would be their last run, thus avoiding any backslide that has happened with other acts in the past who decided to hang it up only later realizing they wanted to continue.

Those who have caught Motley’s performances on the run know that the band’s theatrics are at an all-time high, with drummer Tommy Lee‘s latest drum attraction being the “Cruecifly.” Watch video of the drum roller coaster as well as some of the other tour highlights in the trailer below.

Live Alliance is expected to premiere the film in theaters worldwide as well as on Pay Per View formats in 2016. To stay up to date with the film’s release, subscribe at either Motley’s Fanbridge page or their actual website.