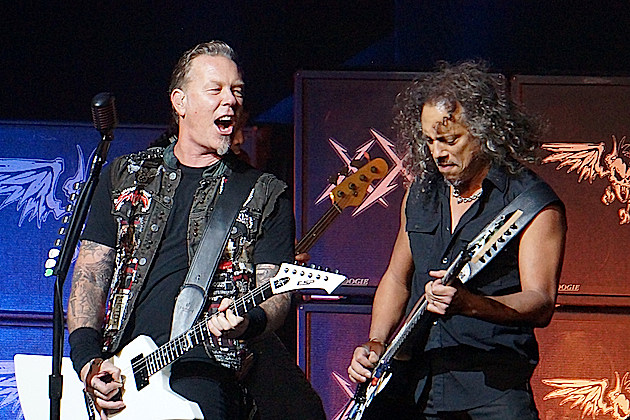 Yeayeahhhh! For metalheads, Metallica‘s pre-Super Bowl 50 performance at AT&T Park in San Francisco, Calif. will be a more important event than the halftime bash during the big game. While the show has been sold out well in advance, fans around the world will have the opportunity to catch the performance from the comfort of their own home. With the stage set for “The Night Before” performance, Metallica will be launching a live webcast of the full concert!

The show will be happening this weekend, on Saturday, Feb. 6, where the thrash legends will be performing a hometown show. The webcast will stream in 1080p FullHD starting around 8:30PM PT and will be available on desktop and mobile devices at webcast.livemetallica.com. Keep an eye on the band’s social media channels because they will be providing updates from the stadium as crews work to prepare the baseball stadium — home of the San Francisco Giants — for a Metallica concert as seen below:

There have been some concerns from local residents about noise pollution at the event. AT&T Park has struggled to contain the volume from concerts held at the stadium, including past performances from Jay-Z and AC/DC, both which received noise complaints from as far as three miles away. Vice President of Giants Enterprises Sara Hunt is not worried, telling SFGate.com, “We’ve been working with acoustic engineers. We don’t anticipate any problems with Metallica.”

James Hetfield has been busy not just preparing for the special event, but doing voiceover work for the hit animated series, American Dad. The frontman recently appeared as a water polo coach on the show also named “James Hetfield.” Part of the joke is that he also looks and sounds like James Hetfield and even has all of his guitars, but states that he is not the Metallica icon. The episode also featured “Master of Puppets” and “All Nightmare Long” interspersed with some water polo action! Clips from the episode can be seen below:

So…did anyone else know that @metallica’s @papa_het_ appeared on #AmericanDad this week?

No seriously, how did I NOT know @metallica’s @papa_het_ was going to be in this week’s #AmericanDad episode?! #AndWhoTheHellThoughtOfMakingHimAWaterPoloCoach? #AndRogerForAll

Metallica have been in the studio working on their follow-up to 2008’s Death Magnetic and posted a clip of a new song from the studio in December last year. The song sample was only made available to Metallica fan club members, but membership is free and fans can sign up here.

Revisit the Story Behind Metallica’s ‘Ride the Lightning’