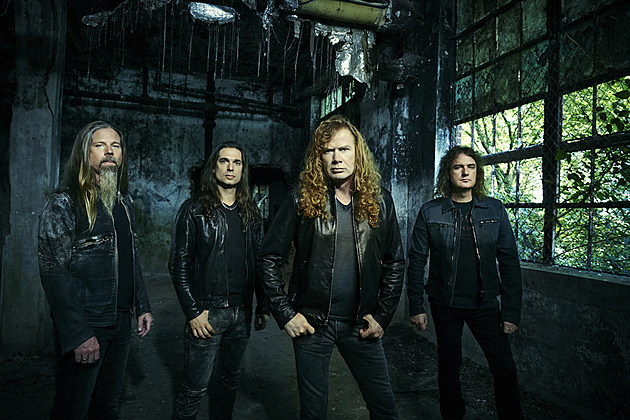 Over 30 years and 15 albums into their career, Megadeth are still proving why they’re one of the leading forces to contend with in metal. The latest album from the thrash titans, Dystopia, is a remarkable return to their classic form with some new flavors thrown into the mix, resulting in the band’s highest charting album in 24 years, debuting at No. 3 on the Billboard 200.

The position marks the second highest charting in Megadeth’s storied career with 1992’s Countdown to Extinction reaching No. 2. Its follow-up, Youthanasia, came close to besting the efforts of its predecessor, peaking at No. 4. Netting their highest debut chart position yet, Megadeth’s Dystopia shifted 49,000 units with 48,000 in pure album sales (streaming services now count towards chart numbers). The disc was only bested by mega-selling efforts from pop stars Adele and Justin Bieber on the Billboard 200 chart.

Dystopia is the first Megadeth album to feature the talents of Kiko Loureiro on guitar and Lamb of God‘s Chris Adler behind the kit. The two replaced the departed Shawn Drover and Chris Broderick, who both exited the group in late 2014. In an exclusive interview, Megadeth mainman Dave Mustaine gloated about his new guitar player, saying, “You can tell when somebody has feeling in their playing verses someone that can really play well but has no feeling. Kiko’s got this incredible knack for being able to pick up on stuff I show him. He takes it and makes it his own.”

Megadeth will be out in full support of their new album, bringing Suicidal Tendencies, Children of Bodom and Havok out with them. The trek will commence on Feb. 20 in Dallas and come to a close on March 24 in Quebec City, Quebec. For a full list of dates, visit our 2016 Guide to Rock + Metal Tours.

See Where Megadeth’s Peace Sells… But Who’s Buying? Landed on the Top 80 Hard Rock + Metal Albums of the 1980s