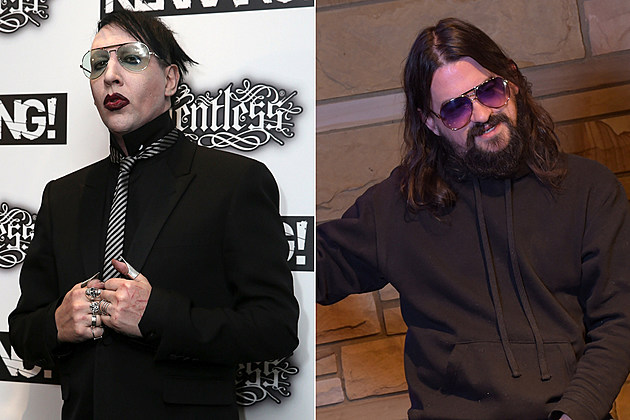 Marilyn Manson may not be the first person you’d associate with Shooter Jennings, and if you throw ’80s music producer Giorgio Moroder into the mix, you’ve got one odd project. But Manson will make a guest appearance on Jennings’ upcoming Giorgio Moroder-inspired collection, Countach (for Giorgio).

Jennings, who started his career more in the country and southern rock vein, has started to spread his musical wings in recent years dabbling in psychedelic rock, pop rock and now the synth-leaning Countach set. Moroder began to make his name in the ’70s producing disco singles for Donna Summer and others, before writing and producing pop songs for such films as Top Gun, Flashdance and The Never Ending Story, often incorporating keyboards and electronic drums in the process.

As for Manson’s contribution, he turns up on a cover of “Cat People,” the Moroder-produced soundtrack song initially recorded by David Bowie for the ’80s film of the same name. If you’re unfamiliar with the original, check it out in the player below.

According to the description of Jennings’ new disc, Countach is not viewed as a tribute album, but rather a “sound collage style journey through ’80s and ’90s culture, innovative songwriting, genre-bending fiddle-meets-synthesizer soundscapes and a shrine to books, bytes and beats.”

During an interview last year with Full Metal Jackie, Manson discussed his friendship with Jennings. “He’s adorable, I call him a Muppet,” said Manson. “He and I did a song together that we tried to use for Sons of Anarchy but I still have his 8-track recorder at my house and I’m not sure if it’s his guitar or his father Waylon Jennings’ guitar in my house.”

He went on to add, “When he and I met each other and became friends we were instantly best friends. He was another brother that I had never had and there are very few people that I meet like like that. I’d never had siblings so it’s difficult for me to try and associate them, but anybody who’s willing to lay down their s–t or throw off their leather jacket or punch somebody for you — if they have to. Not in a drunken bar fight kind of way but someone to defend your honor and defend you as a brother. It means a lot to me and that’s what I found with Shooter.”

As for Jennings’ Countach album, you can pre-order it now on pink vinyl at this location. The set also includes guest appearances from Brandi Carlile, country rock pioneer Steve Young and computer gaming giant Richard Garriott. Though initially available on vinyl, the collection will eventually be released on CD, cassette, 8-track, digitally and other cylinder formats.