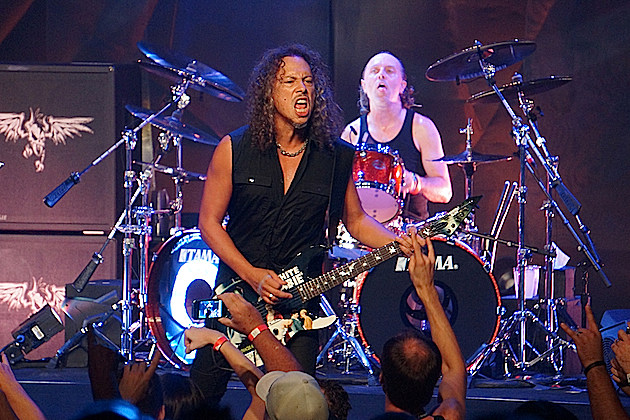 There’s been a lot of buzz surrounding Metallica‘s long-awaited new album in recent days, especially with drummer Lars Ulrich offering a look at frontman James Hetfield laying down some new riffs in the studio earlier this week. But does that mean fans will definitely get a new Metallica album in 2016?

According to Kirk Hammett, it is likely the album will arrive next year, but he doesn’t guarantee it, offering early 2017 as a possibility, too. In a new interview with radio station 103.3 The Edge WEDG, Hammett says, “Well, you know, we’re moving forward. We’re hoping that the album will be released next year. It’s pretty much more along the same lines as Death Magnetic — kind of like that direction. And, you know, we’ll see. We’re into it. I don’t wanna say that we’re a third into it, or two-thirds into it, or an eighth into it, ’cause anything could happen that’ll just change that number. But, eventually, you will see a new Metallica album, and it will most likely be in 2016, and at the very worst, at the beginning of 2017.”

In the same interview, Kirk was asked about the band’s longevity, and he responded by saying he doesn’t see Metallica slowing down anytime soon. “We’re all getting up there, but we still have drive, we still have energy, we’re still inspired, we still have things that we wanna do. You know, mentally, emotionally… I mean, I think that we’re not done yet. And if people like [Rolling Stones legends] Keith Richards and Mick Jagger can do it into their seventies, why can’t we? That’s my attitude. And on a personal level, I’m a musician. I wanna continue to play and perform and do what I do, which is make music. I don’t wanna stop doing this. I don’t wanna stop making music.”

Listen to the entire interview with WEDG here, and stay tuned as more info on the new Metallica album surfaces in the coming weeks and months.