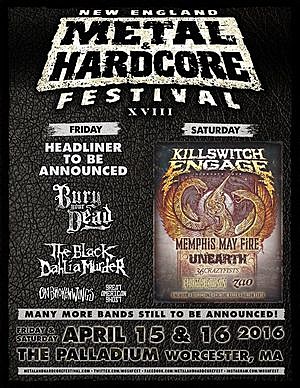 The 18th annual New England Metal & Hardcore Festival will be held April 15 and 16 at the Palladium in Worcester, Mass. The first 14 bands, including Saturday night’s headliner have been announced, with many more to come.

Killswitch Engage will be headlining the festivities on Saturday, April 16. The band’s latest album Incarnate will be released March 11. They are headed out on tour beginning March 16 with Memphis May Fire and 36 Crazyfists, who will also be playing the New England Metal & Hardcore Festival on April 16.

Other acts on the bill that day include Unearth, Zao, Earth Crisis, Ringworm, Reflections, Culture Killer and Hollow Earth.

The headliner for Friday, April 15 will be announced soon, but a few other Friday bands have been revealed. They are Bury Your Dead, the Black Dahlia Murder, On Broken Wings and Great American Ghost.

Tickets go on sale Friday at 12PM, and will be available at FYE stores, the Palladium box office, and online via ticketfly.com. Advance ticket prices are $30 for Friday, $35 for Saturday, or $59 for a two-day pass.