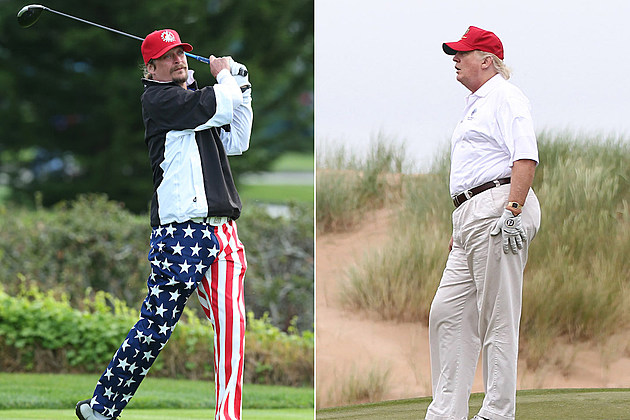 Kid Rock, the American badass, has revealed who he currently supports as the Presidential race continues to heat up. Enthralled by the circus that has surrounded the campaigns thus far, he admittedly is not a political expert, but has shown support for leading Republican candidate and real estate mogul Donald Trump. The firebrand hopeful has been the center of controversy after a flurry of incendiary comments, but Kid Rock hasn’t seen much change and believes in trying something new.

“I’m digging Trump,” he said candidly to Rolling Stone. “I feel like a lot of people, whether you’re a Democrat or a Republican, feel like if you get Hillary [Clinton] or Bernie [Sanders], or you get [Marco] Rubio or [Ted] Cruz or whoever, there’s going to be the same s–t,” he said of other candidates. Questioning the state of affairs over the last couple decades, he continued, “Has that much f–king changed when anyone’s in office, whether it’s been a Republican or a Democrat in office, in our lifetime, anyway?”

Kid Rock went on to answer his rhetoric, stating, “I haven’t really seen this big, like, f–king change. Obviously some people f–ked up. [Laughs] That’s a long debate. My feeling: let the motherf–king business guy run it like a f–king business.” Noting the sensationalism behind Trump’s run, the singer added, “And his campaign has been entertaining as s–t.”

When asked if he think Trump will get the nomination, Kid Rock responded, “I think he will. To me, I’m just like, ‘We gotta try something else,’ and… I’m not an expert at political science or anything.” Though not an expert, he does keep a watchful eye on events, as he stated, “I do try to follow things, obviously. I’m a pretty good, tax-paying citizen of this country. [Laughs] Let the business guy in there. It’s not really working too well running it not like a business. I mean, what business f–king survives when they’re f–king broke?” It is worth noting Trump has filed for bankruptcy four times in the last 25 years and one is only eligible to file for bankruptcy every eight years.

Rockers have been divisive about the political race and Kid Rock now joins Five Finger Death Punch‘s Zoltan Bathory and Ted Nugent on the side backing Trump. The candidate has also used rock classics to support his campaign, including Aerosmith‘s “Dream On” and Twisted Sister‘s “We’re Not Gonna Take It.” Both Steven Tyler and Dee Snider are personal friends with Trump, but have requested that Trump cease using these songs.

See the Age of Kid Rock + Other Rockers