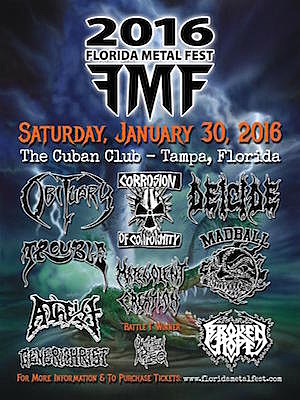 The first annual Florida Metal Fest has been announced! The one day festival was conceived by John and Don Tardy of Obituary and will include some longtime Florida death metal veterans among others. Taking place in Tampa, Fla., there’s really no better place to see a day’s worth of death metal acts than where some of the genre’s best originated.

The lineup will feature Obituary as the headliner in addition to fellow Florida legends Deicide and Malevolent Creation. Also appearing will be Corrosion of Conformity, Chicago doomsters Trouble, New York hardcore stalwarts Madball, Atheist, Broken Hope, Generichrist and winners of a battle of the bands competition, Untoten Krieg. The billing is one to drool over, especially for a first year festival.

Commenting on Florida Metal Fest, co-founder and Obituary vocalist John Tardy said, “My brother and I have been so fortunate and thankful to be part of some the best and biggest music festivals in the world. The amount of people, bands and energy these festivals can bring is just awesome. From the first time we played one, it has always been a dream of ours to put together a music festival that is not only fun for the fans, bands and crews, but one that also brings a closeness to all involved.”

The dream is finally a reality and the manic vocalist continued, “After years and years of talking about it, we finally decided the time is now. We want to put together a first class festival. From the venue to the PA, from the lights to the lineup we are trying our best to make this as memorable event as possible. No festival, anywhere in the world, even with the best possible lineup, would work if the area does not support it. I think that Tampa, and its surrounding cities, is a great music area and one that is ready to make this event come to life.”

Florida Metal Fest will take place on Jan. 30 at the Cuban Club in Ybor City, a part of Tampa. One more local act will be announced following another battle of the bands being held on Dec. 26. Tickets are $40 in advance and $50 the day of the show and can be purchased here.

For more information on all festivals, check out our 2016 Guide to Rock + Metal Festivals.

Obituary will be on tour providing direct support for Cannibal Corpse in February of 2016 alongside Cryptopsy and Abysmal Dawn. For a full list of dates, click here.