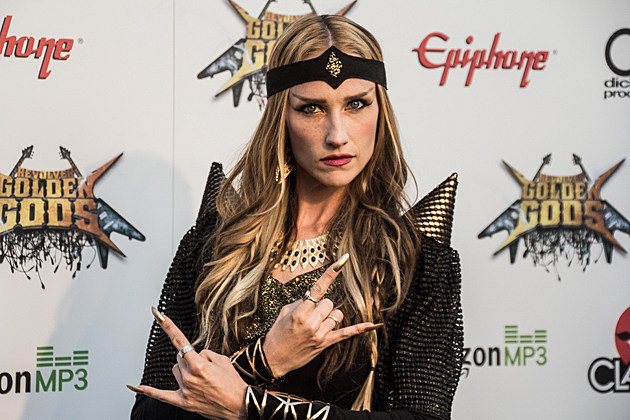 It has been a tumultuous year for Huntress singer Jill Janus, but it appears everything is back on track for the frontwoman and the band as they prepare to head into 2016. After a false dissolution of the band and a cancer scare, Janus is back feeling at the top of her game.

Speaking in an interview with Maximum Metal, the powerhouse singer spoke about her recent health issues, exclaiming, “It’s a celebration! I am cancer-free after a hysterectomy to remove a small tumor from my uterus. It’s strange, I feel healthier than ever and the voice is strong. I’m full beast mode again.” Adding to what keeps her going, Janus stated, “I desire to live. I feel this is all I need to keep going. And music is my savior. I’m always working on songs or performing. I’ve written and recorded one album a year with Huntress. That drive, although somewhat destructive at times, has kept me alive.”

Towards the end of October, fans awoke to surprising news, seemingly suggesting that Janus had ended Huntress. The vocalist made a Facebook post, announcing,

The end. I told ya the Huntress trilogy would fulfill my purpose. I’m packing it up. Maiden, Mother, Crone. I struggle through life with bipolar, schizophrenia and dissociative identity disorders. I beat uterine cancer with a devastating hysterectomy. I will continue to create music. On my terms. F— the meaningless noise and trolls. My way, forever. Suck it. Done.

The next day the rest of the band confirmed Huntress was very much still active and cited Janus’ mental health instability as the reason behind her post. Later, the singer echoed the statements of her bandmates, stating,

Back to business! Yes, I am still the singer for Huntress. I’ve seen some heavy s–t, but so often the things I say or do are misconstrued even by those closest to me. It is the end of an era for Huntress, we completed our trilogy, writing one album a year. I look forward to writing more Huntress records, and working on new musical projects I’ve been developing. The best is yet to come! JJx

Huntress, as referenced, completed their thematic trilogy with the album Static on Napalm Records. The record yielded the singles “Flesh” and “Sorrow” for which music videos were made as well.

Speaking about what the future holds, Janus concludes, “For the first time in my life, I’m not looking forward to anything. I’ve released three albums in rapid succession. I’ve toured the world, done things people can only dream about. I’m going to trust the Universe and take a ride, baby. I’ve seen some heavy s–t and I’m just stoked to be alive. The vultures can wait.”

5 Questions With Jill Janus of Huntress