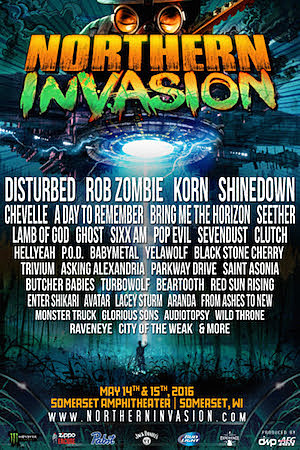 The spring is shaping up quite nicely for hard rock and metal fans. With the Rock on the Range, Carolina Rebellion, Fort Rock and Welcome to Rockville lineups already revealed, it’s now time for Northern Invasion‘s time in the spotlight.

After a stellar debut year, the Northern Invasion will expand to two days in 2016, with the weekend of May 14 and 15 being spoken for in Somerset, Wis. Such top line acts as Disturbed, Rob Zombie and Korn are leading the way this year.

“Year one of Northern Invasion was everything we hoped it would be, and then some,” comments Joe Litvag, co-executive producer of the festival for AEG Live. “The incredible rock fans of the upper Midwest came out in full force, and the response was so overwhelmingly positive that we just had to expand! We’ve got two full days in 2016 with over 40 bands, more stages, more camping, new VIP amenities, and an upgraded food experience. This is turning into something really special up North, and we’ve got the loyal rock audience to thank for it.”

Chevelle’s Sam Loeffler says, “We are super excited to play Northern Invasion 2016! Be prepared!! We’re going to rock new Chevelle songs from the upcoming release and, of course, play the fan favorites.”

Specially priced pre-sale tickets will be available beginning Tuesday, Dec. 15 at 10AM CT at the Northern Invasion website. Visit the festival’s Facebook and Twitter pages to find the password to purchase pre-sale tickets. The regular on sale date for the general public will be Friday, Dec. 18 at 10AM CT. Check out the Northern Invasion website for all ticketing, camping, lodging and lineup questions.