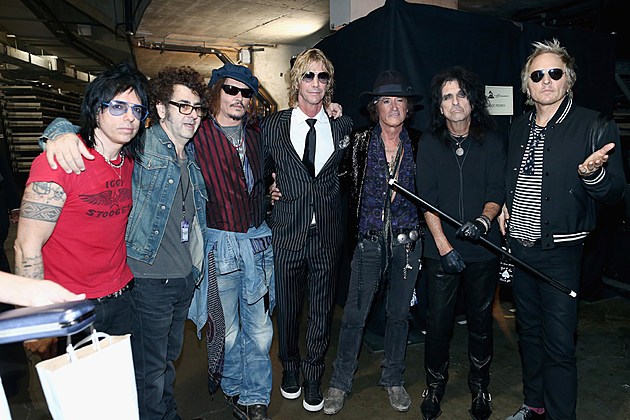 Hard rock got a true spotlight during Monday’s Grammy telecast. During “music’s biggest night,” the Grammys carved out some time in their schedule to salute one of the true legends of heavy music — Motorhead‘s Lemmy Kilmister — who passed away on Dec. 28 at the age of 70.

Dave Grohl first came out and stated, “Many of us play rock and roll, but very few of us are rock and roll. Lemmy Kilmister was rock and roll. He was a rebel and an outsider, one of a kind and a way of life. He was Motorhead. He was a legend and I was proud to call him my friend. I have an ‘Ace of Spades’ tattoo, but the truth is Lemmy and Motorhead left their mark on me a long time ago, just as they did for everybody who’s ever loved rock and roll. As Lemmy taught us in ‘Ace of Spades,’ the pleasure is to play. So tonight, I wanna thank Lemmy and the late Phil ‘Philthy Animal’ Taylor for their music and everything it meant.”

He then introduced the all-star collective Hollywood Vampires, a band who also have done their time on the Sunset Strip, who proceeded to pay homage to Lemmy. They first started with their new single “As Bad As I Am,” before launching into Motorhead’s “Ace of Spades.” The camera moved over to an amp stage piece with Kilmister’s signature hats, basses and a jacket draped over the microphone. Alice Cooper belted with aggression, ably backed on vocals by bassist Duff McKagan, while the band, which also features founding “vampires” Johnny Depp and Joe Perry, rocked hard with plenty of pyro. The group’s lineup also features Matt Sorum, Tommy Henriksen and Bruce Witkin. It should be noted that Sorum once manned the kit as a fill-in for Motorhead at one point in his career.

Kilmister was a beloved figure not only in the world of rock and metal, but in music in general. And Motorhead have a history with the Grammys, as the band received a Best Metal Performance Grammy in 2005 for their performance of “Whiplash” on the Metallic Attack: The Ultimate Tribute disc saluting Metallica.

For those curious, “As Bad As I Am” is a new Hollywood Vampires song that appears on the deluxe edition of the group’s self-titled album. Cooper recently revealed that the track was inspired by a story told by Johnny Depp about his father, who used to toast, “Good as you are, bad as I am.” Cooper took a liking to the toast and felt it sounded like a good song lyric and the track took off from there.