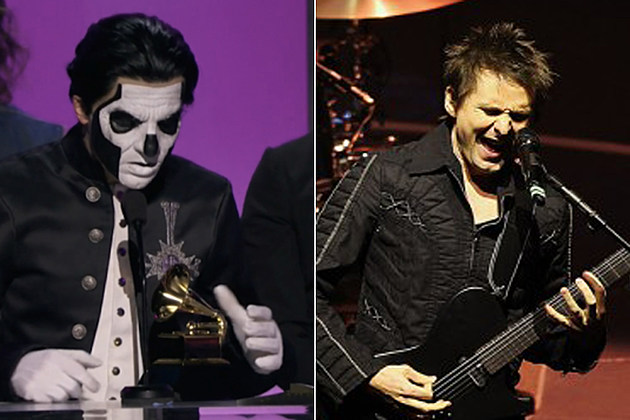 For those wondering about the rock and metal winners for the 2016 Grammy Awards, those honors have all been dished out.

The fun began during the Grammy pre-telecast, where metal fans patiently waited a few hours to learn that Ghost would be the winner of the Best Metal Performance category for their song “Cirice.” They, along with fellow nominees Sevendust and August Burns Red, were in attendance, and Ghost made an impression with the audience as they were decked out in their full costumes. Papa Emeritus III told the crowd, “You know a nightmare has turned into a dream,” upon accepting the honor before directing the audience members to go party.

While Highly Suspect did not win in the Best Rock Album or Best Rock Song categories in which they were nominated, Johnny Stevens and the band did leave their mark on the pre-telecast crowd. The band delivered a blistering performance of their Grammy-nominated single “Lydia” much to the enthusiastic delight of the crowd.

Another act who walked away empty handed were Foo Fighters, who were up for Best Rock Performance for “Something for Nothing” and Best Music Film for Sonic Highways. But you could make a case for Dave Grohl “winning” Grammy weekend with a buzzed about performance at the MusiCares Person of the Year ceremony honoring Lionel Richie and appearing with his Nirvana bandmates and Beck playing a David Bowie classic at Clive Davis’ annual pre-Grammy party.

Past winners Slipknot also failed to score a Grammy, not that it mattered to Corey Taylor, who recently stated that he felt the Grammys were a popularity contest and that he didn’t have time for it. Slipknot did not attend and lost out on both the Best Metal Performance and Best Rock Album categories. See the full list of rock and metal winners below.