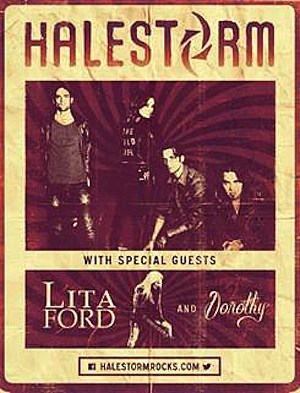 Halestorm is heading back out on the road for a batch of U.S. tour dates. Rounding out the bill will be Lita Ford and Dorothy, turning the tour into a female empowerment carnival on wheels.

Halestorm is still riding high after releasing Into the Wild Life last year. The band’s rise to prominence keeps ascending as time moves on, so be ready for some packed houses and rabid fans.

“This is a tour I’ve wanted to put together for a long time,” says Halestorm frontwoman Lzzy Hale.  “Not just a package with every band featuring a girl–that’s been done a million times. This tour is a different breed, showcasing loud, powerful female voices. Every frontwoman here holds her own both on and off the stage, and has fought more than her share of the good fight. This isn’t your sister’s woman music fest! I’m honored to have the legendary Lita Ford on this run and welcome newcomers Dorothy who make me so proud of the future of rock. All fans of true rock music—men, women, everyone—need to see this show.”

The legendary Lita Ford will act as direct support for the three-week run. Lita’s new memoir, Living Like a Runaway, is set to hit shelves on Feb. 23, so look out for that too. Dorothy will also take part through the entire tour. Halestorm will also share the stage with Rob Zombie on a few additional dates.

Halestorm also just released a new music video for “Mayhem,” off Into the Wild Life. Check out the fresh clip below.

Check out Halestorm’s 2016 dates below.

See the Birthdays of Lzzy Hale and Other Rockers