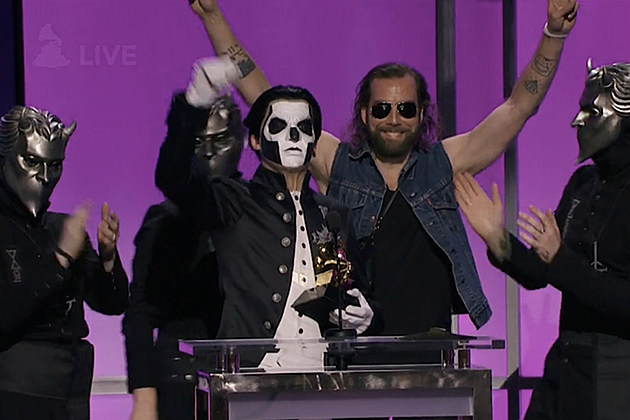 Congrats are in order for Ghost. During the Grammy pre-telecast, a number of honors were given out and Ghost were named as the Best Metal Performance Grammy winner for “Cirice.”

The competition in the category included August Burns Red‘s “Identity,” Lamb of God‘s “512,” Sevendust‘s “Thank You” and Slipknot‘s “Custer.”

The members of the band were on hand to accept the honor. Dressed in full attire, they took the stage to receive their trophy and Papa Emeritus III did the speaking. In a brief speech, he stated, “Thank you so much for this. This is a big, big thing for us. You know a nightmare has just turned into a dream. Thank you all for that. Thank you to everyone involved for voting. Now, go party!”

Stay tuned throughout the evening for all of your hard rock and metal coverage.

A Nameless Ghoul From Ghost: ‘It’s Just a Big Honor’ to Be Nominated for Grammy