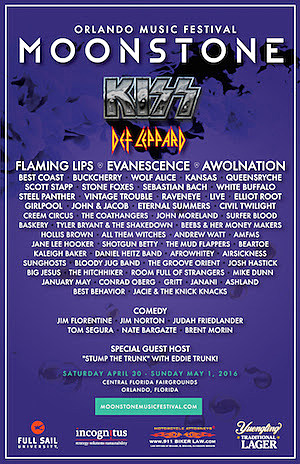 The inaugural Moonstone Music Festival is turning out to be quite the eclectic event. Last year, organizers revealed that such acts as KISS, Def Leppard, Sebastian Bach and Scott Stapp would be playing. Now a slew of festival additions have been revealed, led by Evanescence, Buckcherry and Queensryche.

In addition to that trio of rock acts, fans can also look for alt-rock favorites AWOLNATION and Best Coast joining the bill along with classic rock legends Kansas. The music weekend is set to take place April 30 and May 1 at the Central Florida Fairgrounds in Orlando, Fla.

Plus, there will be a comedy showcase featuring Jim Florentine, Jim Norton, Judah Friedlander, Tom Segura, Nate Bargazte, Brent Morin and an edition of “Stump the Trunk” with emcee Eddie Trunk.

To get details on ticketing packages, click here and stay tuned to the Moonstone Festival website for additional details on the music weekend. Keep up to date with all of the 2016 Hard Rock + Metal Festivals in our handy festival guide at this location.