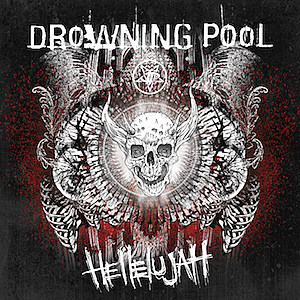 Drowning Pool recently revealed plans to release their Hellelujah album in February, but you don’t have to wait that long for new music. The group is teaming with Loudwire to bring you the exclusive U.S. premiere of their new song “By the Blood.”

“We’re excited as hell to get our brand new single out to everyone,” says guitarist CJ Pierce. “Back to the core sound you know from Drowning Pool! Crank it up!” After debuting here, you can also look for “By the Blood” being featured during the World Series of Fighting 25 match taking place tonight at 11PM ET / 8PM PT on NBC Sports. The eight-man, one-night tournament will take place at the Comerica Theatre in Phoenix.

In addition to the new song, Drowning Pool have revealed the Brian Mercer-designed cover art and track listing for their new album, both of which can be found in this article. The group recorded the album over the last few months with producer Jason Suecof, digging into the core sound of the group and helping to craft a new set of hard rocking anthems.

You can currently pre-order Drowning Pool’s Hellelujah via Amazon or iTunes. The disc is due Feb. 5, 2016 via Entertainment One Music. The band has two holiday themed shows in their native Texas next month. Catch them at Houston’s Scout Bar on Dec. 17 and Dallas’ Trees on Dec. 18. And keep an eye out for more Drowning Pool dates in 2016.

Drowning Pool, “By the Blood”