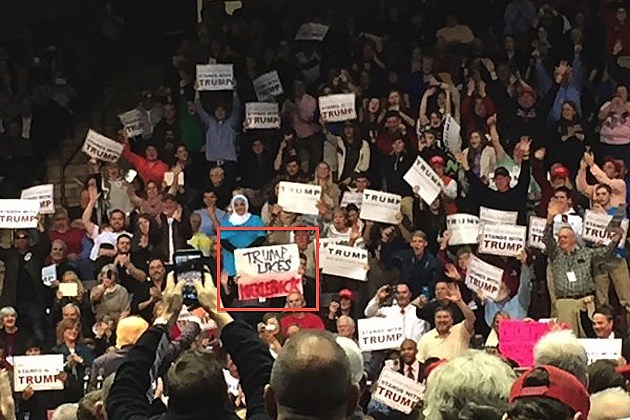 Donald Trump has been accused of some questionable things during his time as a presidential candidate, but one person has taken Trump-shaming to a new level — or perhaps he was just complimenting his taste in music. At Trump’s Jan. 8 rally in Rock Hill, S.C., an attendee held up a sign reading, “Trump Likes Nickelback.”

This guy put some serious effort into trolling Donald Trump, likely waiting for a long time to gain access to Trump’s highly attended town hall. He ended up sitting right behind Trump’s podium — perfect for prime photobombing. His sign was promptly confiscated, but not before journalists began tweeting photos of the scene. Well done, sir.

Interestingly enough, this was the same rally where Rose Hamid (seen wearing hijab in the two above tweets) was kicked out of Trump’s rally for silently protesting Donald’s proposed policy of banning all Muslims from traveling into the U.S. Hamid also wore a shirt reading, “Salam I come in peace.”

Does Donald Trump like Nickelback? He’s yet to comment, but we obviously wait with baited breath. Fellow presidential hopeful Ted Cruz has also been trolled with “likes Nickelback” signs during this current campaign cycle, as was Rahm Emmanuel back in 2012.