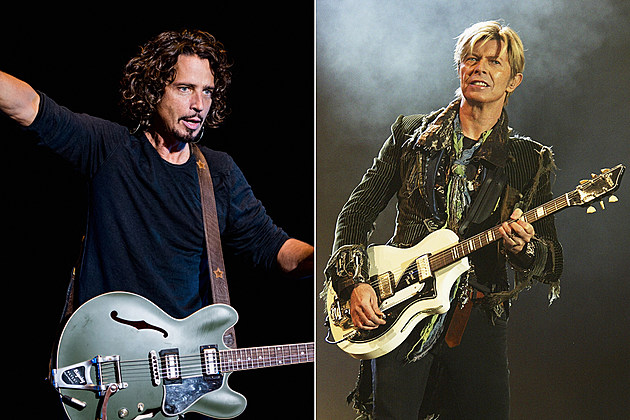 Like many, Soundgarden frontman Chris Cornell is mourning the loss of a true artist, the legendary David Bowie. While many used Twitter as their vehicle for voice their thoughts on the loss of Bowie, Cornell stated that 140 characters would not suffice. He then followed with his own testimonial about Bowie in piece written for Rolling Stone.

Cornell recalls frequently seeing the Ziggy Stardust album as a kid in the collections of most people who knew and eventually having his interest piqued to find out what it was all about. “Listening to that record was a bit like going to college, like the Beatles,” says Cornell. “The songwriting is incredible. I didn’t know anything about him and it was a bit past when that album as a moment in pop culture, but I didn’t care. I was interested in the songs and loved every single song on the album.” The rocker says his second introduction to Bowie was seeing him as the clown character in the “Ashes to Ashes” video and the changing of personas taught him that you could be whoever you wanted to be as a musician.

Later in his life, Cornell says he finally met Bowie at a Vanity Fair photo shoot. He recalled, “I’d almost rather not meet someone I’m a fan of because I’m afraid that they’re gonna say or do something that’s going to change how I feel when I listen to their music. But he was an incredible guy, super inclusive and warm. I’m always uncomfortable in most situations, and he made everybody comfortable. He was this bright light.”

Over the years, Cornell has played Bowie’s “Lady Stardust” in his solo sets. At first, it was just a song that he liked from the Ziggy Stardust album, but over time it took on more meaning. The vocalist says at first it reminded him of Andy Wood, the late Mother Love Bone singer who inspired Cornell to form Temple of the Dog. Then it really hit home with him after the split of Soundgarden. “I came across that song, and I remember sitting in my car in the driveway listening to it, and there’s that lyric, ‘He was all right, the band was all together,’ and it’s so hopeful,” said Cornell. “My band had just broken up. And it really gutted me.”

The vocalist revealed that Bowie had been on his mind a lot lately, having been a fan and recently picking up the singer’s Blackstar album. He revealed he also liked Bowie’s The Next Day disc, his penultimate release. “Both albums show an ongoing evolution,” said Cornell. “I need people like David Bowie, people who are always moving on and not in a frustrating or slovenly way. It encourages me because I want to be able to write music and create albums until I drop dead.”

The rocker concluded, “You don’t know how important someone is to you as an artistic influence until suddenly they’re gone. I’ve certainly been having that experience. It’s kind of equal parts sad and celebratory to think, ‘Awesome. What an amazing career he had and what an amazing legacy he’s left for everybody.’” To read Cornell’s full testimonial, visit Rolling Stone.