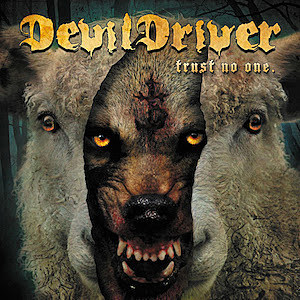 DevilDriver have been churning out albums steadily over the last dozen years, releasing a disc every other year. The band’s latest effort, Trust No One, breaks that streak, but promises to give fans something worth the wait. Following up their acclaimed 2012 release, Winter Kills, DevilDriver have set May 13, 2016 as the release date for Trust No One, via Napalm Records.

The album cover gives a clear indication of the title, cleverly juxtaposing a wolf’s face between a sheep’s head, utilizing the age-old expression of “a wolf in sheep’s clothing.” Frontman Dez Fafara commented on the record, simply stating, “Almost three years in the making, get ready for a new DevilDriver record!” Promising punishing grooves, dominating hooks and in-your-face lyrics, fans know to expect the best from one of metal’s mainstays.

Replacing longtime guitarist Jeff Kendrick, the band added Neal Tiemann to their ranks earlier this year. Trust No One will mark the six-stringer’s studio debut with DevilDriver.

Fafara has been busy in 2015 touring with his reactivated Coal Chamber. The singer expressed earlier this year that it was good to have DevilDriver take a bit of a break. Speaking with the Rockpit, he stated, “It wasn’t even just a case of burn out, we put out a record every two years solid for 12 years and we never really took a year off between touring, which most bands do.”

He went on, “And it was like ‘You know what? Let’s recharge.’ Mike [Spreitzer] went home and does his studio and is surfing everyday, I was helping to re-do my studio here as well and by the time they were all ready which is now … I mean they have been writing daily and sending me songs nightly … by the time we all get done here, we’ll probably get in July-August with about 20 songs and I’ll start narrowing it down and then we’ll get together in October-November and do a record. I’ll tell you now, it’s definitely going to be something blistering! The music is on a different level right now with what’s going on with DevilDriver.”

Pre-orders for Trust No One will be available soon. Again, the record will be out May 13, 2016 via Napalm Records.