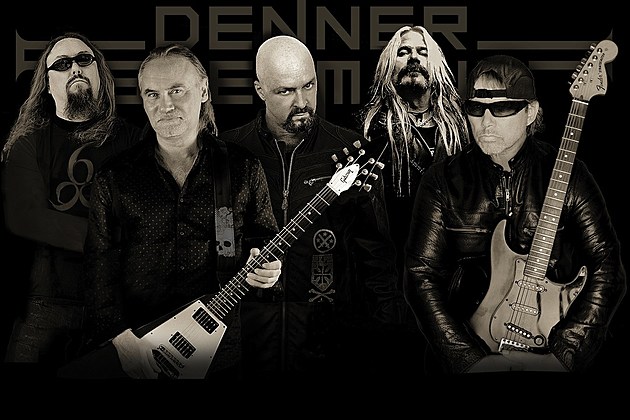 We recently caught up with Hank Shermann, half of the namesake of Denner / Shermann, the newest band from the legendary twin guitar attack behind Mercyful Fate‘s first five albums. The axeman spoke about the band’s ripping new EP, Satan’s Tomb, their forthcoming full length debut, and the writing process of being an international band. Check out the interview below:

You teamed up with Michael Denner when you started Force of Evil back in 2002 and obviously there’s the history of you two with Mercyful Fate. Now you have Denner / Shermann. What keeps you two coming back and writing together in all these different incarnations?

You know, since we – I met Michael the first time back in 1979. All the way back to the ’70s. You know, I think we just, first of all, we have a really good friendship. We fit each other’s personality really well. And also, for the guitar playing, we have the same kind of inspirations. And we were brought up on the same albums and all that, so our style also compliments each other really well. And the sound we have together when we play, you know written guitar stuff, has a unique sound that is obviously most recognized with Mercyful Fate.

Since we’re both from Copenhagen [Denmark] and have stayed here all our life, you know, we — Michael has a record shop in the center, in the city, downtown Copenhagen. I go there often, we talk a few times a week at least. And then our paths have crossed. He went off with King Diamond and then we got back together in a band called Zoser Mez then we reformed Mercyful Fate.

Then I had a project, then we — picking up from where your question was — we got back together and formed the band Force of Evil. And basically that’s the same idea that we have now, it’s just like the timing seems to be perfect for both of us. We are pretty much in sync with ourselves and know what we want at this point in life. So we are very aware of the direction and are very focused on basically what we have just released here [Satan’s Tomb].

Why did you decide to go with the name Denner / Shermann instead of picking another band name like Force of Evil?

When we decided to basically celebrate ourselves, you know like with the 30th anniversary from Melissa and Don’t Break the Oath because no one else had plans to do this, I said, “Hey Michael, we need to at least for the fans — do something, so we got this idea sitting on the couch playing a few snippets of each of record from those two albums. In that process, within about nine months we — the natural step for us was to kind of, “Hey, let’s form a band.” Also, regarding the band name, you know, we just said, “Hey, Michael, Denner / Shermann, that’s for the people who at least know what we are about, who know what they are getting.

It’s right to the point.

Exactly, and also like rather than Hellfire or something cool and heavy metal, I think for this, me and Michael can develop a brand so we could … do videos or books or merchandise and all that, so I think me and Michael together have some nice impact and much more potential than being separate or have a band name – because Denner and Shermann will always be there.

It’s already something that’s established with your career, so it’s not like you have to start off and people go “Who’s this band?” It’s instant, everybody knows exactly what they’re getting.

The key factor is probably me as a songwriter because that’s how I compose music anyway. In the ’80s, I did the majority of the songs and then King would do the lyrics and all his lines. So it is like almost difficult not to sound like something you have might heard. In that, goes me and Mike have a sound together.

Snowy Shaw was in on the Time album recording, had also previously been recording with King Diamond and been touring with Mercyful Fate, as well. Snowy just has this very personal signature drum sound and also, his style is so significant and I believe that me and Michael had something different as well. That put together, goes really well with the songs here. It’s almost impossible not to have a similar sound to Mercyful Fate. We were very focused that that’s where we wanted to stay. When I do songs, that’s my natural starting point … my natural starting point would be Mercyful Fate type of heavy metal. We really wanted to just be that, because that’s what we feel we enjoy a lot.

Cage, which is your singer Sean Peck’s primary band, has been labeled a Christian band in the past due to some members making it public about their religious beliefs. The lyrics on Satan’s Tomb have a lot of evil overtones but nothing takes a definitive stance here, just kind of more storytelling and fantasy Has there been any backlash from your fans or from Cage fans about this whole Christian vs. Satan thing?

I’m aware, of course Mercyful Fate, fronted by King Diamond. We had that all evil, Satanic kind of image. Especially with the lyrics and some of the stage performance. I was not aware at all whether Cage should be labeled a Christian band. I couldn’t imagine that, though.

I have to ask Sean, but like you said, Sean is like a storyteller. He can go in any direction. He can go into the King Diamond universe, because he’s brought up on that. He can go in like, comic hero universe, fictional universe, anything. These four songs are our first songwriting together, I did all the music. Sean did all the lyrics and the vocal lines, so this is our first compositions together. From now on, I think we will go a little deeper. Maybe be a little more evil, try and find our own unique style with the lyrics. But no, there hasn’t been — I haven’t heard anything about Christian versus the evil stuff or anything. Not at all.

And also, our fan base of Mercyful Fate vs. Kind Diamond — the album has just been out a month, so the reaction hasn’t reached us yet. But so far it has been received tremendously good so we’re really pleased with that. That’s really cool.

The band is spread around the world. The digital age makes this less of an issue than it used to be. You also spread the recording process over a few different studios to make it more convenient. When you do the full length album, are you going to be recording together or will it be a similar process?

That’s like when you want a really cool person in your band, the perfect band member, so I mean nowadays it’s possible to work it like we do. Sean in San Diego [Calif.], Marc in Denver, Colo., Snowy in Gothenburg [Sweden] and me and Michael in Copenhagen [Denmark]. That is only possible because of the Internet.

Of course, that’s not like the perfect scenario. But we have 30-plus years experience of recording and know how to deal with this stuff. So, doing the full length album, me Snowy and Michael will be at least in the studio together because we already are planning that right now and whether Sean and Mark are flying out to Gothenburg because we will be using the same studio. We haven’t decided yet but if that’s not going to happen then it will easily work with file transfers and then you make your changes, and then file transfer back. Insert to Pro Tools and it works pretty good.

What’s your favorite song off the EP?

I like the title track, “Satan’s Tomb,” that has a twist as well because I had already written that song for a famous American band that – a song that had similarities with Mercyful Fate. I composed the song, had it ready and when I eventually had to send it off, suddenly they didn’t respond and later in the press I read they had big internal issues in the band. So I had a song, I recomposed a bit and did some modification and that was actually the first song I sent off to Sean. Then two to three days later we had our first track, it was “Satan’s Tomb.” It has all the elements we’re known for. Michael’s sweep playing, cool heavy metal riffs and some melodic stuff. The guitar duals, so I think it has it all.

“Seven Skulls” gets more into the fantasy territory. You were saying Sean can write some of that comic book feel. Do you see your next album going a little bit deeper? That had a lot of different stuff going on in that song compared to the others.

Yeah, totally because “Satan’s Tomb” and “War Witches” the two first tracks on the EP were more, standout in our terms. When we did “New Gods” and “Seven Skulls,” I wanted to add more layers. Do a little more of what I would usually do with Mercyful Fate. I added a lot of different ambience to it, tempo changes and a lot of fun stuff in there.

For the full length album, we already have seven songs worked out and we will start recording in mid December and hopefully as it looks now we can have a release in May 2016 and for sure, it’s going to be – it’s awesome, the tracks, I love them. They’re not different, but I went in a little different direction where I wanted to be adding more layers. It will also be more evil sounding, a bit heavier and a bit more metal. Maybe the word plotting may come in with Sean’s lyrics and stuff.

I think it’s a nice upgrade because the first four songs we did, that was our first – we only had one goal. We had four goals for doing those four songs because we are going to have three months to execute the whole album. So now we’ve had a little break and I’m already onto new adventures, different directions within our style of course. It’s going to be heavier and more evil, and more layers to it in general.

Our thanks to Hank Shermann for the interview. Pick up Denner / Shermann’s ‘Satan’s Tomb’ EP at iTunes.