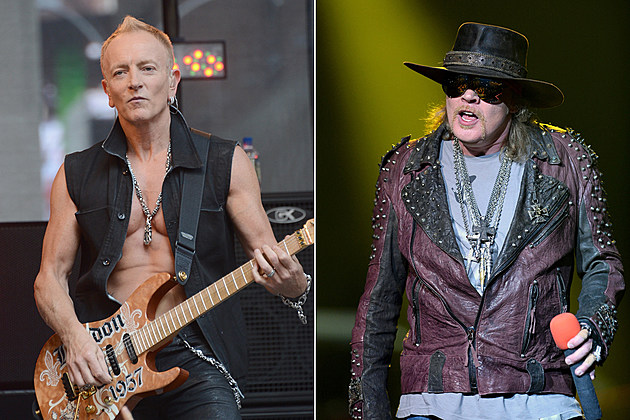 Is it better to split up only to figure out past issues later in life and reunite or to soldier through the hard times with a decades long career? That’s an idea that’s at the center of recent comments made by Def Leppard‘s Phil Collen, who was asked in an interview about the upcoming Guns N’ Roses reunion with some of the classic band members.

Def Leppard and Guns N’ Roses both reached major heights in the ’80s, but their careers took very different paths from that point forward. The guitarist stated that while he was interested in seeing returning members Slash and Duff McKagan playing alongside Axl Rose again, he felt it was kind of lame that the original lineup had to reunite in the first place. Collen told the Telegraph, “We obviously think it’s really f—ing lame. I love Guns N’ Roses. I think they’re really cool. I’d love to see Slash and Axl and Duff play together. That’s great. But I think it’s f—ing lame considering we’ve been hardcore. Our integrity’s still intact. We’ve never split up. We’ve gone through if someone had a little sniffle or something, we soldier on.”

He added, “Someone dies, someone loses an arm, someone gets cancer, we soldier on. [With Guns N’ Roses] if someone has a little barney backstage, they can’t deal with each other. I know it’s difficult, but I do think it’s pretty lame when you compare anyone else to us.”

Whether it’s the decades long existence of the core Def Leppard lineup or the fascination of returning members to the Guns N’ Roses fold, music lovers will have a chance to see both bands playing live this year. Def Leppard is expected to return to the concert stage later this year as they’re currently one of the headliners for the inaugural Moonstone Festival in May and have a new album to promote. Meanwhile, Guns N’ Roses have already announced five shows during the month of April, with more dates expected to follow.