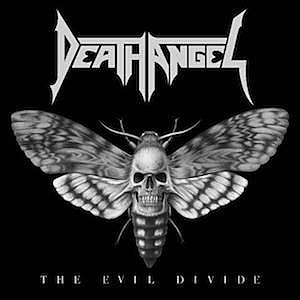 Bay Area thrash icons Death Angel have been on a hot streak since reforming around the turn of the millennium. With four stellar albums since the reunion in the books, The Evil Divide will be the next record fans can wreck their necks to. The record will be out May 27 on Nuclear Blast, but they’re already offering a taste of what’s to come.

The Death Angel website solely consists of the album cover for The Evil Divide, a countdown clock and, the most exciting part, a play button for a sample of new music! A foreboding introduction plays with tremolo picked guitars signaling doom, but they quickly give way to some straight up thrashing, which is enough to prove Death Angel are once again on top of their game despite only having a small musical sample to go by.

“We are pleased to announce… our new album is done!” exclaimed the band, adding, “Just listened to the final mastered cut and couldn’t be more satisfied. Ted Jensen at Sterling Sound in N.Y. did an AMAZING job as usual. We absolutely cannot wait to lay it on you! Time for a celebration. Cheers!” For now, the cover for the record will still bring questions as to how a seemingly innocent moth has turned into a symbol of evil, but the skull depicted on its back coupled with the insects’ nocturnal proclivities may provide some temporary answers.

When revealing Death Angel would be putting out a new record this year, singer Mark Osegueda stated, “It’s got the aggressiveness of the last two records, but our songwriting has improved dramatically. Really, it sounds like Death Angel should.” Their last record, The Dream Calls for Blood, was the first to land inside the Billboard 200 since 1988’s Frolic Through the Park, peaking at No. 73.