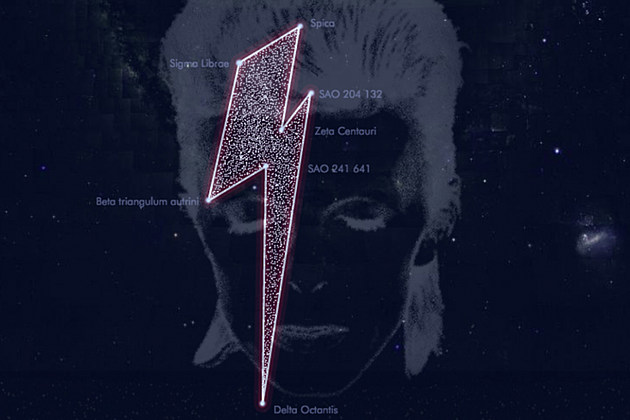 Some legendary rockers have had fossils named after them and some have received a tribute with a star carrying their name, but the late David Bowie is getting an entire constellation! Though the ‘Starman’ has left Earth, his legacy will forever be echoed in the vastness of the shimmering heavens of space he adored so much. Whether there is a thunderstorm or not, fans will always be able to look up and see lightning.

Adopting the signature bolt across Bowie’s face on his 1973 record, Aladdin Sane, Studio Brussels, a Belgian music station, collaborated with the MIRA Public Observatory to honor the cultural and musical icon. As DDB Brussels reported, Philippe Mollet of MIRA commented, “It was not easy to determine the appropriate stars. Studio Brussels asked us to give Bowie a unique place in the galaxy. Referring to his various albums, we chose seven stars – Sigma Librae, Spica, Alpha Virginis, Zeta Centauri, SAA 204 132, and the Beta Sigma Octantis Trianguli Australis – in the vicinity of Mars. The constellation is a copy of the iconic Bowie lightning and was recorded at the exact time of his death. ”

Fans can also contribute to the constellation by adding “stardust” tributes at Stardust for Bowie and filling in the lightning bolt with their favorite Bowie song and a short message. Upon opening the page, the classic “Ziggy Stardust” appropriately plays and fans can even read tributes others have left.

The legend’s 25th studio album, Blackstar, was released on his 69th birthday on Jan. 8, just two days before he lost an 18 month battle with liver cancer. Rockers around the world have expressed how much David Bowie influenced them and have offered tributes to the late musician.