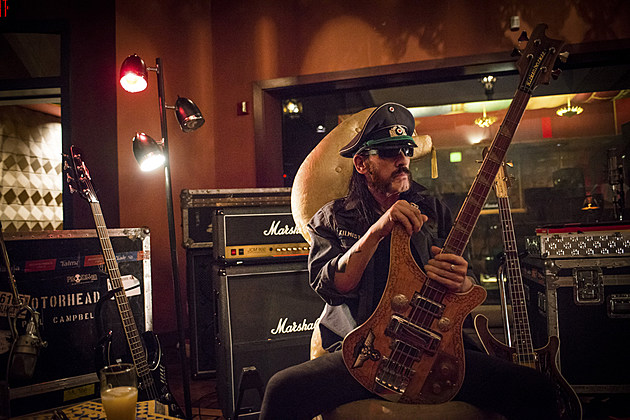 Saturday (Jan. 29) was a day of celebration, not mourning, as many members of the music and entertainment community gathered at Los Angeles’ Forest Lawn Memorial Cemetery to pay their final respects to Motorhead leader Ian “Lemmy” Kilmister. It was a star-studded affair that many were able to view, either in person or via the webcast that sprouted to all parts of the world, even the Rainbow Bar & Grill on the Sunset Strip where many fans in the Los Angeles area gathered to pay tribute.

White and red floral arrangement decorated the room with a specially designed Lemmy Kilmister urn setting front and center of the stage. Lemmy’s longtime manger Todd Singerman kept things moving throughout the ceremony, opening with some brief comments stating that Lemmy “wouldn’t stand for anything formal or somber.” As such, many a story followed from the parade of speakers that spoke to Lemmy’s character and his sense of humor.

The first to speak was Paul Kilmister, Lemmy’s son, who donned a skull and crossbones hat much like his father. Kilmister stated that he felt his dad knew something was wrong way back in August, but that his “uncompromising grit kept him performing at full beam.” He stated, “He was no cop out and he wasn’t about to become one.” He described Lemmy as a man who didn’t have a stage persona. He was “Lemmy” all the time. “To me as a child, he was an enigma,” stated the younger Kilmister. “They say you can’t choose your parents. Well I won the lottery when I got Lemmy … You were perfect, my one and only rock and roll daddy.”

Motorhead drummer Mikkey Dee was on hand to represent Lemmy’s other family. The drummer revealed that Lemmy stated that he never regretted a single minute of his life and called it “an honor and a privilege to have known and played with and learned so much from this great man.” He concluded stating, “I wish the whole world could just get a small piece of what I know about Lemmy,” revealing that it helped him immensely in dealing with the loss.

There were a number of peers on hand as well. Bob Kulick, who helped Lemmy with the theme music for wrestler Triple H and won a Grammy with Lemmy for playing a Metallica cover, stated, “I’m proud to say I knew a modern day pirate, a genius, a legend, a man we wish we could all be.” Slim Jim Phantom, who played with Lemmy in The Head Cat, recalled Kilmister as “a true English gentleman” and a great unifier.

Matt Sorum, who once sat in on drums for Motorhead, stated that playing for Motorhead was like the film Field of Dreams and that he felt he could disappear into a cornfield. He added, “Many people say Lemmy is God. I believe that,” and revealed that Lemmy taught him to never give up or never let anyone get him down.

An emotional Slash stated, “He was such a f—king great example that much of my peers want to be. He was just true to school and had more integrity in one finger than most rock and rollers.” He also recalled how they used to greet each other by showing their drinking flasks and how the one time Lemmy was disappointed in him was when he got sober and no longer had the flask.

Alice in Chains bassist Mike Inez stated, “He was just cool in every sense of the word and I think secretly we all hoped his cool would rub off on us.” Meanwhile, Anthrax‘s Scott Ian concluded his speech by saying, “Lemmy, it was you who taught us that we could be f—ing real. Thank you.”

Judas Priest‘s Rob Halford, the Metal God himself, admitted, “When I was in the presence of Lord Lemmy, I was a bit overwhelmed … Here was a man who lived life on his own terms, a rock and roll maverick.” Halford also shared one of his final moments, getting Lemmy to pose for a selfie in which he kissed him and told him he loved him.

Metallica‘s Robert Trujillo and Lars Ulrich shared stories of how much Lemmy meant to them. And Foo Fighters‘ Dave Grohl broke down while sharing how they bonded over Little Richard and how he actually crossed paths with the rock pioneer and had Little Richard sign a bible pamphlet he meant to give to Lemmy. Closing his remarks, Grohl quoted a Little Richard song called “Precious Lord Take My Hand” before raising a toast to Kilmister.

There were also testimonials from members of Skew Siskin, wrestler Triple H, Ugly Kid Joe‘s Whitfield Crane and well as members of Motorhead’s immediate rock family, like the band’s publicists, promoters, personal assistants and stage manager. Lemmy’s longtime love Sheryl, Rainbow owner Mike Maglieri and several other friends spoke as well. Finishing out the ceremony, a bass was strummed one last time, then placed against a speaker with feedback in honor of ceremony as the webcast concluded.

Though the Forest Lawn ceremony was the major tribute to Lemmy, many of those in attendance were headed to the Rainbow Bar & Grill on Sunset to join the rest of the general public as the tribute to Lemmy carried on into the night, with Metal Allegiance set to pay homage to Lemmy during their set at the Roxy right next door to the Rainbow.