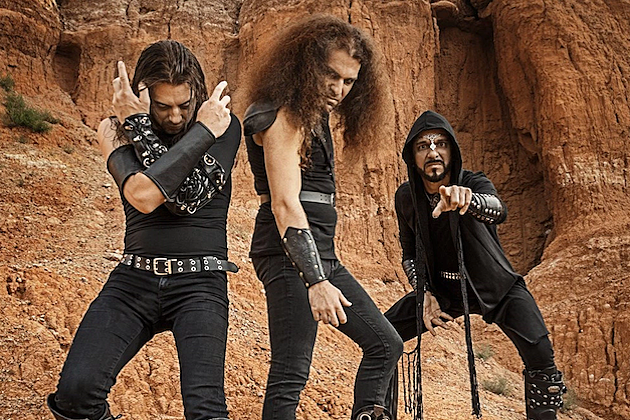 Mythological occult trio Absu will be releasing seventh studio album, Apsu, later this year. The album will complete their trilogy that started with 2009’s self-titled Absu and 2011’s Abzu. Founding member Proscriptor McGovern (drums, vocals) has retained the same lineup of Ezezu and Vis Crom on bass and guitar respectively from the last album and the three will be hitting the road for an extensive tour beginning in mid-March.

Covering 42 dates, Absu’s routing takes them from the East Coast in Virginia across the entire country, up through Canada and finishing close to where they started in North Carolina on April 30. The black metal outfit has begun work on Apsu, but will take a break from the studio to trek across the continent.

Proscriptor commented on the upcoming release and tour, stating, “Since the release of out latest recording, Abzu, the response was extremely vehement and now is the perfect moment to prepare the nation for our new offering, Apsu, which will be released later this year via Candlelight Records. We will be performing a few songs that have never been audibly displayed, in a live atmosphere, as well as one new song that will be featured on the impending opus.” One of the more unique live metal acts, the Absu mainman employs a relentless drumming style while managing to hold things down as the vocalist, delivering his signature raspy vocals and shrieks while engaging the crowd from behind his kit between songs.

Discussing their progress so far, Proscriptor added, “The entire rhythm section for Apsu has been completed and upon our return, I will complete the drafting of the lyrical content, track the vocal lines and finalize the mixing/mastering process. Guest appearances for Apsu feature Rune Erikson/Blasphemer (Aura Noir) and Ross The Boss (ex-Manowar) both contributing solos.”