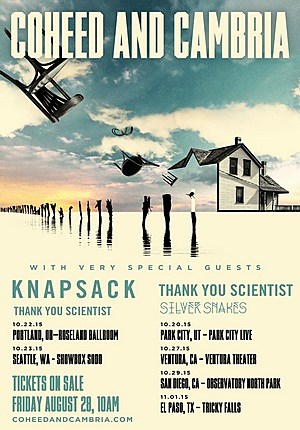 Coheed and Cambria will be unleashing their latest album The Color Before The Sun on Oct. 9 and just a few days later, they will embark on a tour in support of the disc. The band has announced several new dates, beginning Oct. 20 in Park City, Utah.

Tickets for the newly announced dates, which also include Portland, Seattle, Ventura, San Diego and El Paso, go on sale this Friday, Aug. 28. Thank You Scientist will be on the bill for all the shows. Other openers, detailed below, include Glassjaw, Cursive, Knapsack and Silver Snakes.

Before the tour launches in October, Coheed and Cambria will be playing several festival dates. They are on the bill for the Riot Fests in Denver, Chicago and Toronto along with Edgefest in Buffalo, N.Y. and Chill on the Hill in Sterling Heights, Mich. After the trek wraps up, they’ll be playing Fun Fun Fest in Austin, Texas on Nov. 6.

The Color Before the Sun is Coheed and Cambria’s first non-concept album. It was recorded in Nashville, Tenn. with producer Jay Joyce (Halestorm, Cage the Elephant). Last week the group released the video for the track “You Got Spirit, Kid.”