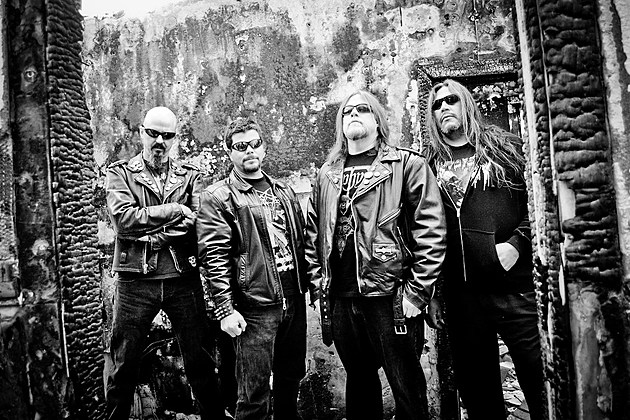 We had the opportunity to speak with Autopsy mastermind Chris Reifert (pictured far left above) and pick his brain about the band’s new EP, Skull Grinder, childhood influences and his preference for an organic production as well as his studio techniques behind the drums and microphone.

The artwork for Skull Grinder (seen below) depicts a giant skull that’s used to grind up people. With Macabre Eternal, you just gave artist Wes Bonscoter the album and title nothing else. What’s the story behind Skull Grinder‘s art?

Pretty much the same, we just gave him the title and said knock yourself out dude and there you go. [laughs]

Did it surprise you when you got the artwork and you saw not just something that was grinding a skull, but a skull that was used to grind?

Yeah upon thinking about it, he actually came up with that first and then Danny [Coralles, guitar] was the one that — yeah it’s all coming back. We saw the painting first and Danny was the one that figured to call it Skull Grinder. It’s like pretty much what it looks like was happening. We pretty much gave him no direction whatsoever, which is what we have been doing lately and just saying ‘All right man, go for it,’ maybe give him some song titles or something like that, but not much else. A lot of the time we will kind of nitpick a little bit you know give him a few suggestions, but this time we didn’t give him anything. We just said dude kill it and he f–king nailed it.

On the EP, “Sanity Bleeds” and “Return to Dead” are both creepy, instrumental passages instead of traditional songs. How did those two pieces come together?

That’s just more songs, you know we didn’t set out with a conscious effort to do it like that. We said ‘okay’ we were going to do an outro and a spoken word thing, it’s just how we do it. Normally, we just come up with a batch of songs and alright, record these and put them in a cool running order and that pretty much it. We don’t normally plan things out very much besides the actually song writing part, which we put a lot of care into, but as far as the grand plan and things like that and way to shake things up [laughs] or whatever — we don’t usually do that. There just happened to be a couple of things written and they seem to fit.

It seems like you guys run with the flow and what it is is what it is.

Exactly, you hit it right on the head there.

Your vocals are dirty, gritty, gargled and manic. When you write your lyrics, do you have certain words or phrases that have to be gargled instead of a traditional delivery or do you run with it in the moment in the studio?

Jim Beam, regular Jim Beam and then some Devil’s Cut too and beer just kind of whatever, I think we just had a whole bunch of Tecate last time. It depends on what’s on sale, pretty much have no standard, its kinds of a tradition to have that and Devil’s Cut.

On the title track, you scream the words “humanary stew” a few times, which is an obvious nod to the Alice Cooper song “Black Widow.” Was Alice your first introduction to horror colliding with music?

He was early on that’s for sure I mean that was in my first batch of bands I got into when I was a kid that was probably 6th grade for me. I found Welcome to My Nightmare at a garage sale for like 25 cents. It definitely had a big impact, in particular “Black Widow” and “Devil’s Food” just the whole album I loved it. I first got into music by, like finding my own thing instead of what was in my parents collection, which was KISS, Aerosmith, AC/DC, Cheap Trick, Alice Cooper and Black Sabbath shortly after that. So that was like first introduction to hard rock or whatever you want to call it at the time.

Would you say your early introduction to Black Sabbath helped shaped the doomier side of Autopsy?

Yeah, probably. I mean you know they were the first to really do that you know. In my opinion they were the first flat out heavy metal band between them and Led Zeppelin or whatever but I don’t really see that; I see Black Sabbath being the heavy metal band out of the two. I love Led Zeppelin but I never saw them as metal. But people argue about that all the time, but yeah definitely I mean Black Sabbath was a huge, huge influence.

Are you going to see them on the upcoming farewell tour?

I don’t know, I have no idea it just depends on when and how much tickets are and you know I don’t know, we’ll see; we’ll see what happens.

Adam Munoz has worked with Abscess from 2000 up until the band’s end in 2010, then with Autopsy since the reformation in 2009. He manages to capture the dirty and gritty sound that is the hallmark of your music. Today, so many death metal albums go for that super clean and polished sound. You don’t even use triggers, samples, anything like that. How important is it to you to preserve the old ways of Autopsy?

It’s everything. It’s not even the old ways, it’s the real ways to me, like real instruments, not what a computer is going to tell you is an instrument and triggers or whatever. I’ve never done that and I can’t understand that whole thing. For me you know every band doesn’t use it all the way, but for me why would I not want my drums to sound like drums? I like the sound of real instruments. It’s as simple as that. And you can’t get any nuances out of the trigger no matter how hard or soft it’s gonna have the exact same sound. You can’t do like a cool like build up drum roll or like you know a quieter to louder things like that will sound the same every time all the time. It just makes it sound neutered to me, I don’t understand, but, you know, click tracks and all those things. I can play in time, I don’t need that s–t.

Well we play a certain way live, we play a certain way onstage, you know, and a certain way in the rehearsal room. Why should the studio be any different? It’s what we sound like. Adam is great, man he knows exactly what we want. When we first started working with him, you know, we were hanging over his shoulder like a bunch of vultures, like every little thing we were like ‘no dude!’ Eventually it got to the point where he knew exactly what we wanted and he started to get annoyed with us. He was like ‘I know, get out of here!’ Now he will, we will work on a mix and he will kick us out of the room to our own devices and call us in when it’s time to listen to something and then we can start critiquing and that sort of thing, but it’s cool man, its great. He knows exactly what we’re after so that we never have to worry about it, and you know in our opinion our albums sound great you know. They sound like what a metal record should sound like. You can hear everything. It sounds real, it doesn’t sound like some graphic thing that a computer disassembled and reassembled.

Personally, all the stuff that you’ve done since re-forming and just because everything sounds polished today, it’s definitely my favorite production. I like the old-school, a lot of the low end, the crunch, the natural and organic, raw feel of everything instead of the processed.

Yeah, yeah. Thank you, I appreciate that. That’s what we’re going for.

Thanks to Chris Reifert for the interview. Pick up Autopsy’s ‘Skull Grinder’ at Amazon or as part of the ‘After the Cutting’ compilation here, which includes a 92 page book on the history of the band. Check back for the second part of our discussion. 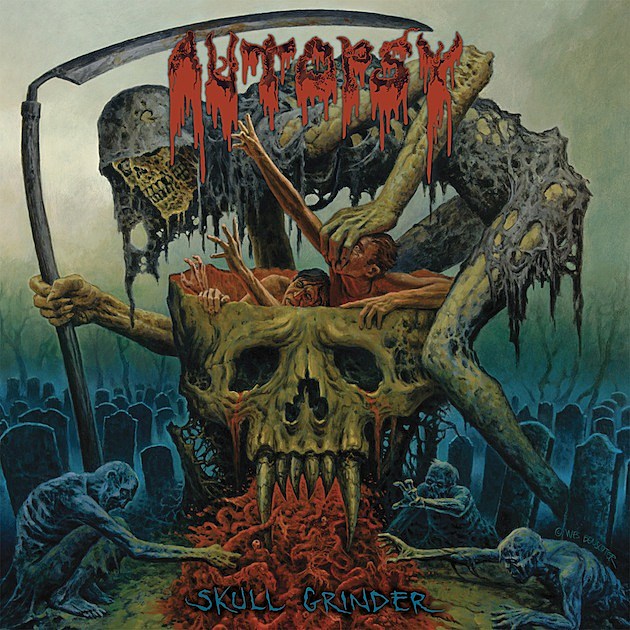