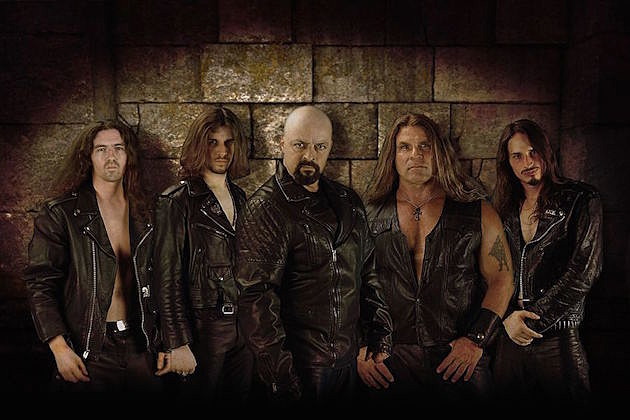 We recently had the chance to pick the brain of founding Cage vocalist Sean “Helldestroyer” Peck. Using a novella he wrote as the inspiration for Cage’s new album Ancient Evil, the singer talked about the record’s concept, personal creativity, his relationship with former Iron Maiden singer Blaze Bayley and his favorite metal singers.

Some bands take inspiration from novels and here you’ve provided the sonic version of your own novel, Ancient Evil. What challenges did you face writing the lyrics after using the novel format to tell the story?

I was approached by some ex-King Diamond members about doing a side project and began creating this horror story manuscript. I just kept filling in the blanks and developed it over time until it was a complete 150-page novella. After that project fizzled out I decided to make it a Cage record and all the guys jumped in and fully committed to this arduous challenge. Following the format was easy but making good songs that can stand on their own is a huge challenge. We had a great time keeping the speed up and coming up with killer headbanging hooks to make this a very special record. We wanted to make sure that the story was not too complicated or obscure that the listener and reader could take the full ride and enjoy this terrible tale.

The cover art was once again created by Marc Sasso. How does the artwork reflect the concept of Ancient Evil?

The cover scene is one of the climactic moments of the story. Without giving it away this thing does not have a happy ending. It features all three of the main characters and hints that this is a monster story. I love the way Marc drew the tentacles and although it was slightly different than what I had as a concept, once again, he did a great job.

You made a video for “Across the Sea of Madness.” Are there any plans for a full length film to complete the trilogy of novel, album and film for this story?

That would be great. We are considering doing a second video that will take it to another realm of the horror tale. The title track was the one being considered. The video was so great and so many people are crying out for more of the story. Maybe I will get approached by some Hollywood producers and we can make the thing a reality. After that then we can go back and do the Hell Destroyer movie but that would take a budget of about $200 million to make the way it is in my head. This video was our first real music video and we are super proud of the producer and director Rich Varville and his crew. They did an insane job on it and we are super thankful. I always wanted lightning to come out of my hands.

“Tell Me Everything” features guest narration from Blaze Bayley. How did this come about and what is your relationship with the singer?

Well he plays the main character Elliot Worthington throughout the entire CD. He did an incredible voice acting job portraying the struggle of the main guy as he fights impossible odds to try to save his wife. There is a long backstory with myself and Blaze starting with a fist fight we had at the Bang Your Head festival in Germany in 2004. Since then we made up and Cage opened for Blaze here in San Diego where I sang “Man on the Edge” with him onstage. I have come to gain a huge appreciation for him and have all kinds of respect for him as a person and musician. I did not want to do the character voices myself which I had done in the past. Getting him involved made it so much more authentic.

Ancient Evil was produced by the band and is arguably the best Cage production yet. What do you enjoy most about self-producing?

Well guitarist Dave Garcia did all the heavy lifting. We hired an outside guy to do it and it was a horrible mix. It sucked because we paid him some good money and he was a friend. I will not name names, but it has permanently affected our relationship in a negative way and I am in another band with the guy so it really sucks. Dave just bared down and started researching mixing strategies and after long hours it came out killer. I really have to thank him because he busted his ass on it after I talked him into using the other guy. We are getting all kinds of review comments about how great the CD sounds which is very gratifying for Dave since he was thrust unwillingly into the task.

In 2015, you released a short novel, a new album with Cage and Death Dealer, an EP with Denner/Shermann, will begin working on the Denner/Shermann full length debut and joined Warrior last year. Do you ever get writer’s block and if so, how do you overcome it? If not, what do you do to keep the creative well from drying out?

Well, Warrior is not active. It looks like that was just a one off; those guys are busy doing their other stuff so it is a relief actually. The three records were randomly just released in October (We called it Pecktober. Ha!) but it was not planned that way, it just happened. So far I have not had any writer’s block and have been able to keep all the music and ideas at a high level of quality based on fan reaction and the press. Now moving forward Cage is halfway done with the next record as is the Denner/Shermann full length. Then we will work on the next Death Dealer. So it is a busy time especially now with touring with three bands. I love it! The more metal the better!!

How did you get the nickname ‘The Hell Destroyer?’

Ha, I gave myself the nickname and it kind of stuck. That is a thing we do with everyone is give them nicknames. I got to throw out three new ones recently with our new lineup. In case the readers don’t know them they are Dave “Conan” Garcia, Sean “The Thrashing Machine” Elg, Casey “The Sentinel” Trask and Alex “The Captain” Pickard. My nickname comes from the Hell Destroyer album.

Who are your three favorite metal singers?

[Rob] Halford, Midnight from Crimson Glory, and probably Ripper [Owens, Dio Disciples, Charred Walls of the Damned, ex-Judas Priest, ex-Iced Earth]. Halford will always be the best metal singer who ever lived and of course was a big inspiration for me even getting into metal and becoming a singer. Midnight was incredible and I got to see him live which was great. Ripper is a friend and is pretty much flawless every time he goes out. It pisses me off! Ha! When the first Cage release came out it was right when Jugulator [Ripper’s debut album with Judas Priest] hit. I stole some style techniques from him. Shhhhhhh….

Our thanks to Sean Peck for the interview. Pick up Cage’s Ancient Evil at Amazon or iTunes.

Cage, “Across the Sea of Madness”