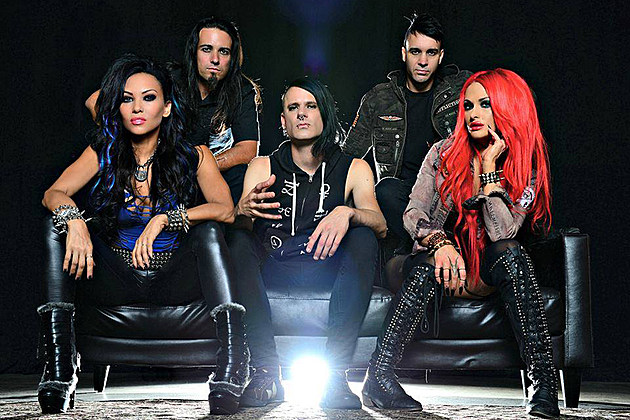 Butcher Babies are killing it on the road right now. The band has been touring constantly in support of their ‘Take It Like a Man’ album, but recently took a few moments to chat with ‘Loudwire Nights’ host Toni Gonzalez. Vocalist Heidi Shepherd and guitarist Henry Flury discussed their new disc, the current single and video for “Igniter” and talked about life on the road, while Heidi offered some insights on being nominated for Rock Goddess of 2015 as well as obstacles she faced during her childhood. Check out the chat below:

Your debut album, Goliath, landed at No. 112 on the carts, and your sophomore effort, Take It Like a Man, debuted at No. 76. How do you feel about that growth?

Heidi Shepherd: Oh, it’s incredible. Even the first week sales more than doubled so it shows that we’re kind of doing something right and our following and fan base is growing. It’s been a steady growth, that’s something we want. Just to come out and bam! Instant success. I think that’d be an instant death as well. For us that steady growth is important. We’ll see what album No. 3 does.

Henry Flury: We started from scratch on this so we were a little nervous as to where the direction – is this going to be better? Will fans receive this well? We were pleasantly surprised and very happy about it.

You’re on tour now. You announced you’ll be joining Cradle of Filth on the road in early 2016. Pure energy and lots of aggression are used to describe your live set. How do you get psyched up on blah days? Because they have to happen. Right?

Henry Flury: Even today, we got about two hours of sleep last night because our ride was so bumpy and so we’re all a little groggy. But like anything, we treat it like it’s a professional sport. So before shows, I’m out running around and sprinting, doing jumping jacks — preparing for a game because that’s how I want to be onstage. And you have to be, you don’t want to be three songs in and just starting to warm up. You have to be ready for the show.

Heidi Shepherd: We’ve been on tour for two and a half months already and we have another month left, so [laughs] for us there are blah days but to be honest, the second that first note hits. It’s just – there’s something inside of you and to use the word ignite. You just become an animal and you step on that stage and it’s your playground. You have 45 minutes to make that stage yours and there’s no better feeling than looking out in the crowd, seeing their faces. I think that has a lot to do with it too, is looking out and seeing these people singing along. Even if you’re having a bunk day, or you’re tired, you see that and you’re immediately energized.

Henry Flury: You see people absolutely losing their minds out there. You can’t help but OK, alright, you feed off that. This is fun, because they do. They lose their minds.

Where does the initial idea of a Butcher Babies song come from? How does the music come into play?

Heidi Shepherd: We like to sit together and write. It’s not one or two people writing everything. It’s all collective, give of us throwing ideas at each other. The great thing is, it’s been the same five members since the birth and for us, we feel very comfortable being creative around each other. Even if it’s a crappy idea, it can evolve into a great idea when you put four other minds on it. It can start with a melody, even just some lyrics and that can inspire the direction of the song. It can start with just something ambient. In fact, one of our songs thrown away on the new album just was an ambient sound. Henry was just messing around on his guitar coming up with different techniques and it ended up being one of the greatest songs on the album.

Henry Flury: I wrote that without even thinking, I was just really testing out this new equipment and I wrote this little piece. I showed it to her – this is interesting – no intention of it at all of being a Butcher Babies song. I didn’t even think it could possibly, then she started singing over it. Wait a minute, this is actually sort of cool.

Heidi Shepherd: Like the second he played it I had the melody in my head, and it was full force from then on. It’s how it works, [laughs].

Henry Flury: There again, we can sit in a room and start jamming out ideas and a lot of it comes from that. It’s really random.

Heidi, do you feel that you have to work harder as a woman in this male dominated world?

Heidi Shepherd: I would like to say no, but at the same time the reality is yeah. But, I am very OK with that. Having that pressure is the reason we have done so well. Always having a fire under our asses to really go above and beyond and do something different and do it well. I think if there wasn’t that sort of pressure, maybe we wouldn’t have worked so hard and maybe we wouldn’t be consistently working so hard. It’s funny to step on stage and see people’s faces who have never seen us before, woah! They’re girls!? They thrash like that and they’re girls? It’s a real unique cool feeling to see that change in their faces, where they have an expectation of oh, they’re girls. There’s no way. Then, just to see them change and see – holy cow. Or showing them that girls can do this just as good if not better than any dude. I think that’s a constant battle for any girl in this industry. I wouldn’t have it any other way, I love the fight. For us, we probably wouldn’t be here if we didn’t have to fight that hard.

Sorry Henry, you didn’t make the cut, but Heidi, both you and bandmate Carla Harvery are up for Rock Goddess of 2015 in the 5th Annual Loudwire Music Awards. What are your thoughts on some of the other nominees like Lzzy Hale and Maria Brink?

People always – I love how you guys are recognizing the females. For all of us, we don’t compete against each other. We’ve created such a girls club and it’s – whenever we see each other. The last time we were in New York, we ran into Lzzy on the street and it’s like a big reunion. All the girls in the category, I’ve met, I think, all of them. We all have this common bond where it’s never a competition between us. I could never be like, hey choose me! But at the same time, choose me. Just kidding! [laughs] Without Maria, when it was 2006 and I’ve told her this — She’s a good friend. I was in a different band and leaning towards really diving into the metal, I was doing punk at the time. My boyfriend at the time was like, there’s another blonde girl into metal. You’ve got to check this out. He showed me their video for “Call Me.” I was immediately just obsessed and I probably wouldn’t have had the balls to go for it if I hadn’t seen Maria really going out there and paving the way for us. For these women, it’s a big girl’s club. We work for it with each other, we have a lot to prove. Any girl who walks away with that Goddess title has earned it. I think they are all goddesses, though.

The video for “Igniter” really captures that live energy that you guys are known for. Tell us about the song.

Henry Flury: That’s one of the more energetic songs on the album. It’s angry, it’s chaotic. That song, for the band, we really enjoy it because when we play it, it really captures the chaos. We always play it with such intensity.

Heidi Shepherd: For us, that song was written about that different state of mind where you kind of lose consciousness and your anger just takes over. We’ve all been there, where you can’t think straight because you’re so f–king angry. [laughs] That’s what that song is about and it really does — I feel that anger on stage when we play it. You have to feel these songs. You have to get up and you have to think about the reason you wrote it and feel that emotion. You can see it in people’s faces in the crowd too. That song was a huge release for us. It’s funny, when we wrote it, there’s one member of the band who [laughs] tends to let himself get into that state of mind more often than not [laughs] and so we sat him down. Okay, describe to us these different emotions you feel in that moment. He just started naming off different things, a lot of those adjectives and a lot of those feelings ended up in the song. It was definitely a band effort.

Henry Flury: Another thing, that was one of the first things we came up with on this album. So for Goliath, we wanted that aggression and intensity to bring that back into this band. We started out that way. From Goliath, we didn’t have songs that were that intense and we wanted to bring back that intensity. So, on Take it LIke a Man, that was one of the songs for that album. We were like, OK this is the anger and intensity we were looking for.

Heidi, you had a very interesting and intense childhood. You grew up Mormon?

Heidi Shepherd: I did. I only had one mom, it wasn’t like that kind of Mormon. I grew up in Provo, Utah. I am the oldest of six kids. It was pretty interesting trying to grow up in that kind of society loving the music I love and being the free spirit that I am. I was really forced into a corner and pigeonholed into one way of thinking. You’re told how to think, how to live, how to look, how to do everything. I even got married when I was 19. I did all that stuff and I finally – I always had this dream of what I wanted to be. I was always shunned for who I was and made fun of for being so different and liking different things. Finally, at I think 21, I just decided – f–k this. I know what I want and I know what I need.

I went through all that, growing up with the abuse and everything. It just took a lot of years to build myself up to pull myself out of that situation and follow my dreams. Every single person I knew was telling me no, psssst. When I moved to Los Angeles, I was a radio deejay and I moved for a radio job. My coworkers were like, see you in 6 months. No one believes anyone can do anything legit and follow their own path there. You’re just forced into something. It’s definitely been an experience and even still, dealing with those things. Dealing with the whole child abuse thing that I had put away for my entire life. I had never talked about it until we started writing this album.

Thanks to Butcher Babies’ Heidi Shepherd and Henry Flury for the interview. The group’s ‘Take It Like a Man’ album is available via Amazon and iTunes. And, as stated, they have a long road ahead of them. Check out their tour dates here. And be sure to catch Toni Gonzalez on ‘Loudwire Nights,’ airing Monday through Friday from 7PM to midnight. To see a listing of stations that air ‘Loudwire Nights,’ click here.