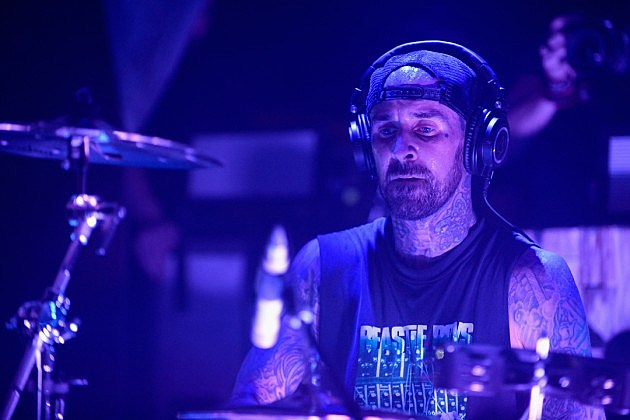 Just last month, Mark Hoppus confirmed via Twitter that Blink-182 were back in the studio. Now drummer Travis Barker is going into greater detail about the band’s current status and musical progress. He also reveals that Matt Skiba, who filled in for Tom DeLonge earlier this year after the band’s blow-up with the estranged musician, is working with them on their new music.

“Matt’s killing it,” revealed Barker to NME. “He’s fun to play with and write with. We’re just getting started but I think we’ve got like four or five songs right now that I’m really, really happy with.” The drummer singles out a song called “Punk Rock Cliche” as his current favorite, stating it’s about “friends of ours and their relationships.”

As for the switch from DeLonge to the Alkaline Trio vocalist, Barker says, “They sound different but still the same. Obviously, it’s Matt Skiba singing so there’s hints of Alkaline Trio, or at least Matt’s contributions to Alkaline Trio, mixed with my drumming and Mark’s voice and stuff. It’s really cool and I really love what we’ve done so far.”

Moving forward with the music, the drummer states, “The goal here is to come up with an album and just write. We don’t put a limit on how many songs we’re gonna write. [We just] write a bunch of songs and when we feel like there’s an album ready, there’s an album ready. You know, no pressure, no deadlines.”

Blink’s issues with DeLonge came to a head over frustrations with the musician’s inability to perform or record with the band. DeLonge has spent a good portion of the year promoting his Angels & Airwaves’ The Dream Walker album, his To the Stars … Demos, Odds and Ends solo collection and developing book and film projects based around the character Poet Anderson. Rather than wait, the band had Skiba join them for a festival show they were scheduled to play and when things came to a head, they continued to work with the Alkaline Trio singer.

Matt Skiba: ‘I Would Be Excited to Write With Blink-182’