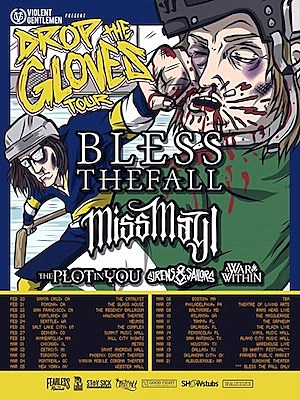 The gauntlet has been thrown down! Blessthefall have announced the “Drop the Gloves” tour, which is set to kick off in February of 2016. The Arizona-based metalcore act will bring heavyweights Miss May I with them for direct support along with the Plot in You, Sirens and Sailors and A War Within.

Blessthefall will be out supporting their fifth studio album, To Those Left Behind, which added “Up in Flames” and “Walk on Water” to the band’s growing catalog of must-see hits. Fellow metalcore outfit Miss May I find themselves in a similar situation, promoting their fifth album Deathless. Both bands came onto the scene at a similar time, with Blessthefall releasing their debut two years prior to Miss May I. As two of the biggest bands in their respective scene, it will be a can’t-miss tour for their rabid fans.

Tickets go on sale Friday, Dec. 11 for the 24-city trek. The “Drop the Gloves” tour will begin Feb. 20 in Santa Cruz, Calif. and extend to the East Coast before circling back west, finishing in Albuquerque, N.M. one month later on March 21.

For a full list of upcoming tours, visit our 2016 Guide to Rock + Metal Tours.