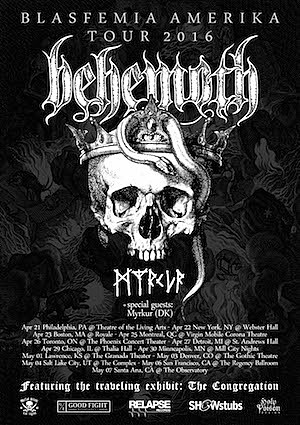 “Blow Your Trumpets Gabriel” indeed! Polish death merchants Behemoth are still riding high on their masterful 2014 release, The Satanist and will be returning to North America for a special run of dates that will see the quartet play the record from start to finish.

Nergal and crew stormed back after the frontman defeated leukemia and crafted their career-defining album. The trek will be a unique one, with divisive black metal outfit Myrkur opening each show in addition to ‘The Congregation’ art exhibit showcasing the work of Behemoth’s artistic partner Toxic Vision.

The Blasfemia Amerika tour will begin on April 21 in Philadelphia, Pa., head up the East Coast and into Canada, dropping back down to the Midwest before coming to a close on the West Coast in Santa Ana, Calif. on May 7. The tour is relatively short, but Behemoth haven’t been shy about coming stateside since the album’s release and already have completed multiple tours across the continent.

Myrkur offer a more delicate, yet equally focused approach to their music and will compliment Behemoth perfectly. The headliners often utilizes choirs and other means of sacrilege to convey their message and the enchanting ethereal vocals of frontwoman Myrkur mixed with the suffocating black metal will do well to set the tone for the night.

Commenting on the tour, Nergal shared his excitement, exclaiming, “We’ve always pushed ourselves very hard trying to reach the highest peaks of artistic creativity. This time around, we are not only coming back to perform The Satanist in its entirety, but are also bringing along a collaboration that’s unheard of!” Detailing the art exhibit, he continued, “Toxic Vision, who is a renowned and absolutely brilliant artist and designer from Canada whom we’ve worked with on several projects in the past (Behemoth stage gear, video clips, costumes…), will be accompanying us on this trek with a unique exhibition called ‘The Congregation.’ We are beyond excited to see how these synergies coexist! Sharon, it’s an honor to welcome you aboard!”

Equally excited is Toxic Vision CEO Sharon Toxic, who said, “It is a real honor to work alongside Behemoth and have this opportunity to bring a vision to life! We aim to dazzle and inspire, I am inviting everyone to step into the dark world of ‘The Congregation’ – an exclusive showcase of my work with Behemoth. Nothing like this has been done before, and of course, nothing is really as it seems with Toxic Vision. This is a culmination of craft and magic … once you step inside, you might never find your way out.”

VIP tickets are available in a limited capacity of 50 per show. The package includes a commemorative laminate, meet and greet session with the band, an 18″ x 24″ poster set (three posters), 42″ x 42″ wall flag, and general admission ticket. Fans looking to take advantage of this can purchase their package here.

The Satanist was released to massive critical and fan acclaim, landing at No. 34 on the Billboard 200 and was ranked the Best Metal Album of 2014 by Loudwire.

See Behemoth in 100 Metal Facts You May Not Know

Watch Behemoth’s Video for ‘The Satanist’