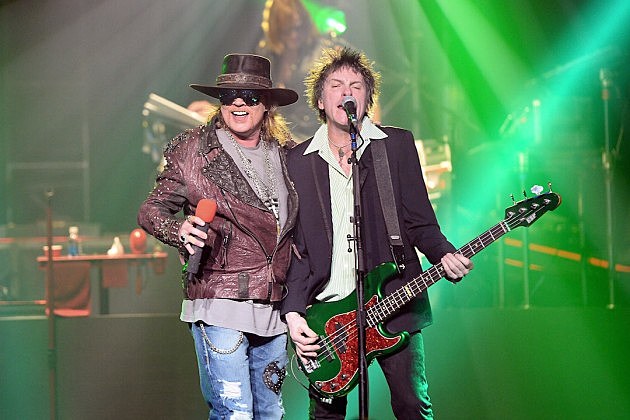 This summer has brought big news in regards to Guns N’ Roses. In July, it was revealed that guitarists DJ Ashba and Ron ‘Bumblefoot’ Thal left the group, and in August, former GN’R guitarist Slash revealed that he and singer Axl Rose, who have been on the outs since the mid-90s, are on friendly terms again. So, the question on everyone’s mind is what does all this mean for the future of the group?

Guns N’ Roses bassist Tommy Stinson was asked that very question by the Star Tribune and his short answer is that he has no idea. “I reach out once in a while to that crew of people — a lot of whom are also my good friends — but I really have no idea what’s going on,” said Stinson. “I didn’t quit the gig or walk away from it. We just all sort of left it in Vegas.” Stinson is also a member of the Replacements and has played with Guns N’ Roses since in 1998. He last played with GNR during their 2014 Las Vegas residency.

He told the Tribune that he is definitely open to playing with the group once more, but referred to his days in the band in the past tense. “I’ll be honest with you, Axl was always very good to me, and it was always a really good gig,” Stinson went on. “It wasn’t necessarily the easiest gig, but it was always good. I have nothing but gratitude for it. If they got together again and wanted me to play, of course I’d have to think about it.” He did mention that while he wouldn’t mind playing with Guns N’ Roses again, his next big goal is to front his own band.

See the Yearbook Photos of Axl Rose + Other Rock Stars