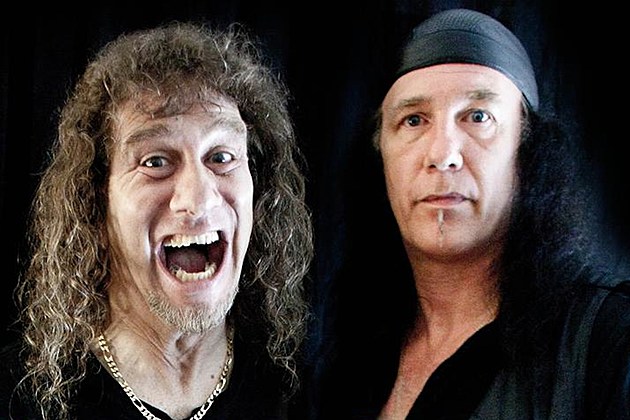 Anvil, perhaps heavy metal’s most persistent band, are set to release their 15th studio album, Anvil Is Anvil, on Feb. 26, 2016 on SPV/Steamhammer. For the first time in their career, the band crowdfunded their album, looking to eliminate the back and forth bands often endure with a label. This process also allows for more creative freedom from the band, ensuring they deliver exactly what they want.

Recorded in October in Cologne, Germany, Anvil is Anvil was overseen by producer Martin ‘Mattes’ Pfeiffer, who has most notably been working with U.D.O., the band featuring former Accept singer Udo Dirkschneider. Commenting on Mattes and the band’s last two albums, Anvil mainman Steve ‘Lips’ Kudlow said, “[Martin has] been working with, and still is working with, Udo Dirkschneider. He did the last couple of U.D.O. albums. We listened to them and they sound great. He seems like a really great guy, [so] we’re gonna try that.”

Expressing no displeasure with their previous producer, he continued, “Not that we didn’t like what Bob Marlette [producer of 2011’s Juggernaut Of Justice and 2013’s Hope In Hell] did. Bob Marlette is a genius — absolutely incredible — [and we] loved his work, but I think it’s important for a band to change its ‘underwear.’” Describing this peculiar analogy, Lips goes on, “It doesn’t change the person, but it changes the underwear, and it is important to change your underwear; otherwise it starts to stink. It’s the same sort of concept: you can’t stay the same; you need to inject something new, something fresh, something that you didn’t do yet.”

Two years after the self-released Thirteen Is Thirteen, the acclaimed documentary, Anvil! The Story of Anvil, pulled at the heartstrings of the metal community. The world was able to see the unrelenting perseverance Anvil had displayed since their formation initially as Lips in 1978. The band’s story became sensational and saw the group enjoy a revival.

When speaking with Metal Talk, Lips was asked about the main changes in the band since the documentary was released. He replied,”The main change is that, basically, we haven’t stopped working, and we were able to give up our day jobs, and this has become it. Which is all that you can ever ask for. I mean, that’s a dream — to be able to do what you love and actually make a living at it. What more could you possibly ask?”

Answering his own question, he stated, “What, to be a millionaire? Well, you know, I think that’s asking too much; that’s getting greedy, and I’ve never been that way. It’s not really been about money as much as it’s been about survival, and I think most people feel the same way about their lives. And I’m no different. It’s not really about being greedy and having millions of dollars; it’s just getting what you want out of life and enjoying it. That’s what it’s really all about.”

Anvil will be taking part in the Back to the Roots 2016 European tour with Dirkschneider. All dates can be viewed here.

Check Out Anvil’s Hilarious Interview With the Necrosexual