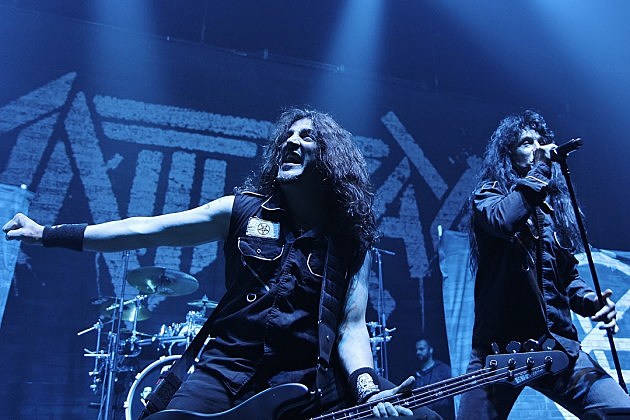 Anthrax finished their touring in support of the Worship Music album in September of 2013, but have been working toward new music ever since. In a new chat with the Mars Attacks podcast, bassist Frank Bello addressed what has felt like a lengthy turnaround between albums and when we might see their next disc.

“We just wanted to take our time, ’cause there’s no rush. It has to be the right record. And for us, you can’t let it go until it’s ready; there’s no reason to do that at this stage. And we learned that, and that’s the way to do it,” reveals Bello. “We wanted to just make sure it’s the right record. And I think… As I speak to you genuinely, I think we have that right record. I couldn’t be more excited for Anthrax. Just as a fan — not even a band member — just as a fan, ’cause I think the songs speak for themselves. I’m really excited right now about them.”

While the band has previously hinted that a 2016 street date is likely, Bello narrowed it down, stating, “We’re talking about January, dude. We’re just about to start mixing. We’re getting all the nitty-gritty stuff done, some B-sides, all that fun stuff. But it’s just about finished, and mixing will start soon. There needs to be a proper setup — when record companies set up a record and make people understand that it’s coming out. By the time you get all that [done], that whole propaganda thing you need to get out there in order for people to know [that the album is on its way]. So, it’s end of August now… We figure… Yeah, I’m thinking January.”

With the recording part done and only cosmetic changes left to be made, Anthrax are turning their attention to the road. They recently hit the road with Volbeat and will be spending time with Motorhead and Saxon in the coming month. Dates can be found here.

You Think You Know Anthrax?