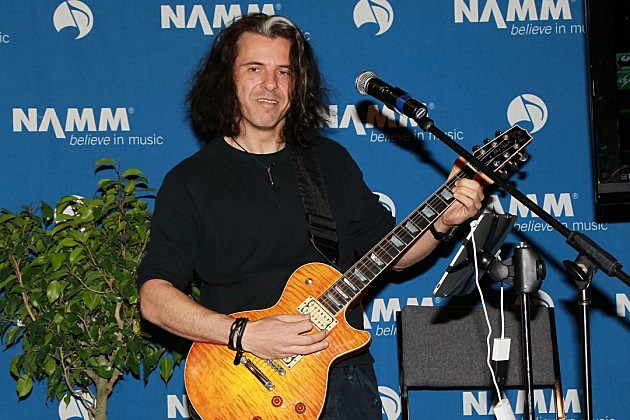 Alex Skolnick was a recent guest on Full Metal Jackie’s weekend radio show. In the interview, the Testament guitarist talks all about the all-star project Metal Allegiance’s new album, recording with Mike Portnoy, David Ellefson and many other artists + the future of the project. Check out the interview below:

What is most important about the camaraderie about Metal Allegiance to the metal genre as a whole?

The core of the project is you, David Ellefson and Mike Portnoy. What’s so different about the satisfaction you get from playing with them compared to any of your other musical ventures?

Well you know, all our musical ventures are very established and for us it’s very fresh in the sense that there isn’t a Metal Allegiance sound. You know, if Megadeth has an album coming out, there’s talk about is this right for Megadeth? Or our good friends Slayer have an album coming out, then everyone is talking about, “Does this sound like Slayer?” So there isn’t that, so you rarely get the feel that you have a blank canvas to play with. So it gives us all of that. It’s also something that the four of us, the three you mentioned along with Mark Menghi, were able to, we made an agreement, we all signed off on this music.

This is a situation for those of us who have sort of been front seat drivers and back seat drivers. We’re all in the driver’s seat on this one. So it’s just a different situation. And for me, as a guitar player, I did all the guitar parts on the record. We had some guest soloists come in later. But the core foundation is me and it is not blended with anyone else. So for me, that’s a first time thing. Where I can point to a record and say, here’s my tone. It’s a lot of fun. We’re having a great time with it.

There are some big names performing on this album. How did you decide what song would suit which person?

You know it’s funny because the fit of most of the vocalists, it’s such a good fit that you know, people that have heard it so far, mostly journalists with advanced copies, they are sure that we wrote the songs around those voices. And that’s not true. The songs were created and as we were nearing the finish line for each tune, then we would start to think about what type of voice to put on it. And we also didn’t know who was going to be available. We knew we wanted to get this out before our upcoming album cycles.

Everyone has album cycles. The Winery Dogs have an album coming out with Mike, there’s a Megadeth record coming. Testament is writing a record, we’re going to have it out early next year. That’s our plan. So, we knew we were racing against the clock and as we were finishing each song we thought, okay, so and so would sound really good on this. Okay, what if he’s not available? What’s another name? Okay, yeah. Then we would compile this list of singers. Then as we got to the point where we were ready for vocals, we narrowed it down. In the end the vocalists we got just seemed to fit the songs like a glove.

Alex, you’ve also been working on new music with Testament. How did making this album inform that and visa versa?

They’re very different. If I have a part that I know is right for Testament, Testament gets a crack at it. I did have a few ideas lying around that just hadn’t found their way onto Testament records. It seems to have worked perfectly here. Also, some of the songs, it’s funny, the song that will most be compared to Testament is obviously the one with my dude Chuck Billy as a guest vocalist on “Can’t Kill The Devil” because when you hear the two of us, it’s naturally going to sound like Testament. But those riffs, and they’re in the style of other Testament riffs I’ve written like “Into the Pit” the single note type of riffs, but that really was a response to the drumbeat Mike Portnoy was playing and I think as it came out we realized, this is sounding great with Chuck.

But I don’t really plan what music comes out of me. I think most artists are probably the same way. The best ideas, they just flow out. You’re not really thinking about it and sometimes an idea will be right for Testament, sometimes it will be right for Metal Allegiance. In my case, I do instrumental music that has nothing to do with metal, including jazz with my trio. There’s an acoustic world music album called ‘Planetary Collusion’ that I did last year. Certain ideas will come out that… they’ll find a home or they won’t. They might just be stray ideas. Sometimes I can tweak them for certain projects, but in the case of Metal Allegiance, there was a lot of opportunity to go places that might not have worked for Testament.

For example, “Dying Song,” which we just released as our premiere video. Phil Anselmo does an amazing on the vocals. That wouldn’t have worked for Testament. Definitely more of a Led Zeppelin, Black Sabbath inspired piece. Then it goes to its own places. With Metal Allegiance allows me to explore these ideas, they’re different configurations that are completely different from Testament. But then, there are moments where there’s a little bit of overlap.

Will Metal Allegiance be an ongoing recording project that makes more albums?

I believe so. It’s always hard to say. I think one of the reasons it’s working so well and the response is so good is that it wasn’t forced. When these guys called me, they said we want to write a record. We think you’ve got the guitar chops and the writing chops to help write this record. I was very flattered, but I really didn’t know what to expect. I’ve crossed paths with these guys on tour, but really didn’t know them that well. I know them very well now, [laughs]. But we never worked together. We said let’s just see how it goes, that was the whole approach. Let’s see how it goes. Maybe we’ll get lucky and have a few good songs, maybe we’ll do half a cover record, half original. But it was never forced. We never said we were going to do this record, it just happened on its own because when we got together, music flowed out. It was just a great chemistry and then the process just worked so well once we brought in vocalists and guest soloists and guest bass players.

So I see no reason why it can’t continue, I don’t think it’ll ever be exactly as it was. First of all the logistics of working with so many guest artists, that’s something else, that’s a whole project in itself. But I think as far as the four of us writing another record and doing something similar, but with different singers. Maybe some of the same, I think so. I think we all want to do it. I think the response has been great, if the response continues to be great and the demand is there as it looks like it will be, I can totally see it happening.

Many thanks to Alex Skolnick for the interview. Metal Allegiance’s self-titled debut album will arrive on Sept. 17. Fans can pre-order the star-studded effort at iTunes or at the Nuclear Blast merch store. Full Metal Jackie’s weekend show can be heard on radio stations around the country — for a full list of stations, go to fullmetaljackieradio.com.

Do You Think You Know Testament?