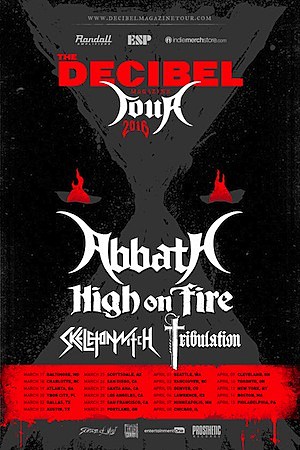 Yowza! The 2016 edition of the Decibel Magazine tour has delivered yet again, this time putting Abbath, High on Fire, Skeletonwitch and Tribulation on the road together. The trek will start March 17 in Baltimore Md. and come to an end on April 15 in Philadelphia. The balanced lineup should please metalheads across the spectrum with a taste of everything between these four groups.

Leading the tour will be Abbath, the namesake band of the long time Immortal frontman. Following a legal dispute with his former bandmates, Abbath ventured out solo rather than continue under the Immortal moniker despite being largely responsible for writing most of the band’s music. The band is expected to release their debut album in 2016, with King Ov Hell (ex-Gorgoroth, ex-Sahg, God Seed, I) on bass and Creature on drums (Kevin Foley — Benighted, ex-Disavowed, live session Sepultura, Sabaton, Decapitated).

High on Fire will serve as direct support, promoting their stellar 2015 release, Luminferous. The sludgy power trio are renowned for their pummeling sonic attack, lead by guitarist Matt Pike and his expansive playing along with his gritty, gravel-toned barks.

Skeletonwitch bring a melodic thrashing fury with an energetic live show that will serve as a perfect warm-up for High on Fire. The tour will mark the first for the band with their new vocalist, who will be revealed in the coming months. Guitarist Scott Hedrick commented on the tour, saying, “Cheers everyone! We are proud to announce that we will be a part of the mighty Decibel Tour. They had us at Abbath, then tripled the ante with High on Fire and Tribulation! All three artists are in my personal top tier of heavy music.”

Gushing even more, he added, “Definitely going to have some embarrassing ‘fan moments’ on this one. Just ask Matt Pike – as an overly excited teenager, I punished him with a game of 20 Questions when I saw them on their first U.S. tour. He still regrets giving me his phone number! New tunes, new singer, new tour, new chapter for Skeletonwitch. Looking forward to seeing you all out on the road.” The band is writing new material for their follow-up to 2013’s Serpents Unleashed.

Opening the tour package will be Sweden’s Tribulation, who are shape shifters changing their style with each album. Initially starting off playing pure, ripping death metal, they switched it up for their sophomore release and lost themselves in dark, progressive death metal waters before unveiling their most recent incarnation. The 2015 effort, The Children of the Night, saw the band enter more traditional metal territory with heavy goth rock influences and raspy vocals to retain the last bits of what used to be a rather extreme style.