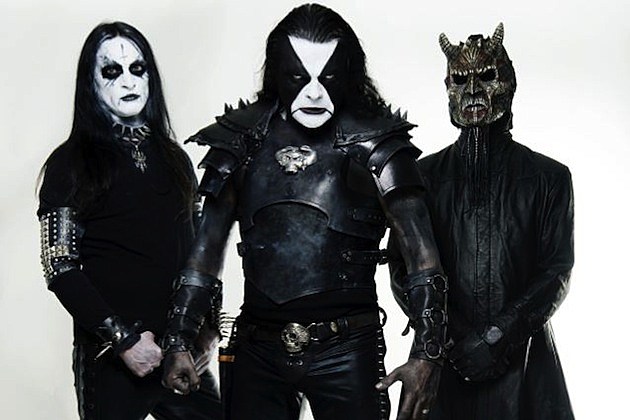 Abbath’s self-titled debut is due Jan. 22, 2016 but the man who laid down the drums on the record has already left the band. French stickman Kevin Foley, also known as ‘Creature’ — pictured above in the mask — made the decision to step down from the new black metal act for personal reasons. In addition to playing on Abbath, Foley had already performed with the band at a few live events.

Posting on his personal Facebook page, Foley announced his departure from Abbath and even referenced the fact that not many fans even knew he was in the band. When the original lineup was announced, it included Baard Kolstad, who currently plays with Borknagar, ICS Vortex, Leprous and more. With the news that he is leaving Abbath, Foley also detailed he will be leaving French death metal veterans Benighted following one last tour.

IMPORTANT ANNOUNCEMENT !!!
As a few of you might already know, I’ve been busy this year playing with the Norwegian band ABBATH as a mysterious character called “Creature” (Sorry to disappoint you if you thought it was the amazing Baard Kolstad smile emoticon ). For some personal reasons, I’ve decided to leave the band.
Still, it’s been a great experience and an honour to play all the band’s shows so far and record the upcoming album in Sweden with Daniel Bergstrand. I’m really happy with the result. I love the songs, the sound and I’m proud of my drumming on this one. Thanks to everyone who has been involved in this project !
As for the near future, I will be touring for the last time ever with my brothers from BENIGHTED in January and February, opening for The Black Dahlia Murder all over Europe. It will be the best way possible to close a 10 amazing years long chapter of my life. These guys are my absolute best friends and I have no doubt that we’ll have a lot of fun on this tour !
After that, it will be time for me to move on, look for new projects and do my best to keep making a living out of music. I’m looking forward to 2016 !

In Foley’s absence, Gabe Seeber of the Kennedy Veil will be hammering the skins with Abbath on their upcoming 2016 headlining run with High on Fire, Skeletonwitch and Tribulation on the Decibel Magazine tour. For a full list of dates, visit our 2016 Rock + Metal Tour Guide.

Abbath was formed by former Immortal frontman’s namesake, who was left to pursue a career outside of the legendary Norwegian act following a legal dispute with two of his former bandmates, Demonaz and Horgh. Foley’s drumming can be heard on the new song, “Count the Dead,” which was released last week along with a cover of Judas Priest‘s “Riding on the Wind” off their legendary 1982 disc Screaming for Vengeance.