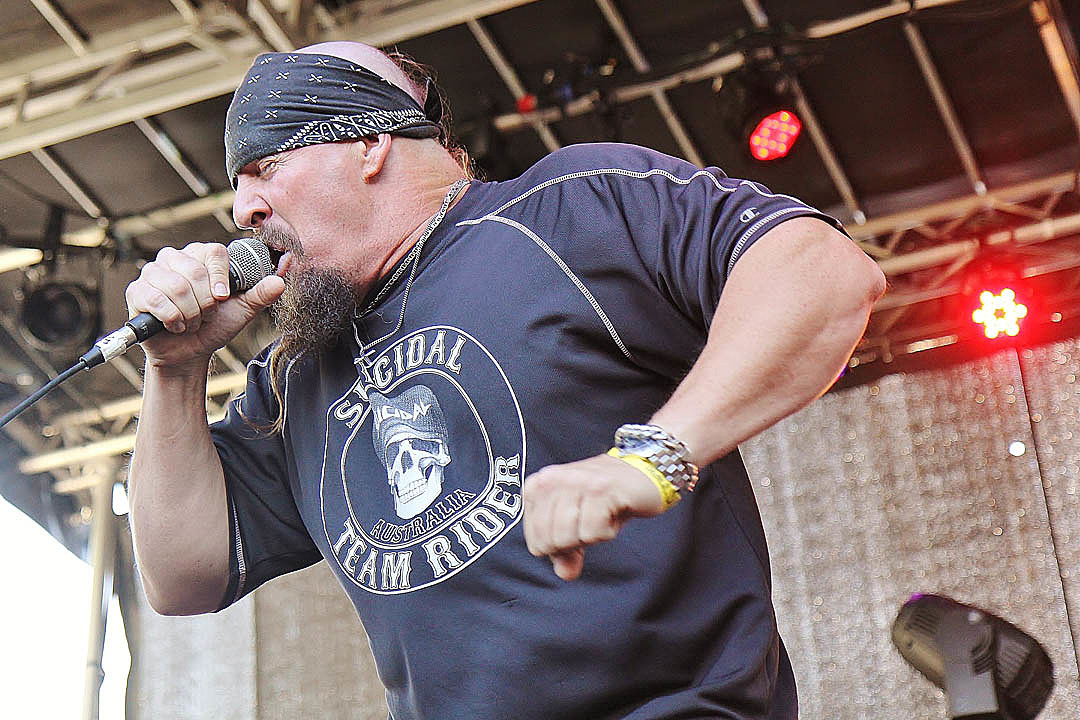 With numerous festivals behind them this year such as Afropunk, Aftershock, Knotfest and many more, we caught up with Suicidal Tendencies vocalist Mike Muir during this year’s Motorboat Cruise. Muir talked in depth about making his own path in music and in life, as well as letting his kids do the same. He dishes on music, family, the bad and good sides of the rock ‘n’ roll lifestyle and much more. Check out our interview with Mike Muir of Suicidal Tendencies below:

If you could be in any band on the Motorboat 2015 Cruise who would it be and why?

Oh, Suicidal Tendencies, and if not Suicidal then I wouldn’t be here. It’s one of those ones where people say, “When did you decide that you wanted to be a singer?”  I never did, I don’t consider myself a singer. Suicidal to me is something that’s different than a band and I think with what we want to do, it’s something that a lot of people wouldn’t understand. When we were first going to do a record, one of my best friends came over  and said, “Mike, turn on the radio and listen to that. You can do that.” I said, “Well what’s on the radio, I don’t like.” I said it many times, my dad always said, “The sure fire way to hate yourself is to get everyone to like you. Do what you like for the right reasons and what you believe in and you’ll be alright.” I think that’s where people get in trouble, they worry about other people who don’t matter and they don’t worry about themselves. It’s not a matter of being selfish, it’s a matter of being smart.

Do you think that’s what punk rock and hardcore music is about?

I can’t really say that because my definition of punk rock is a lot of words. My dad said, “To communicate with someone you have to speak their language.” If a word has a different meaning to somebody then I can’t use punk rock and it has a completely different meaning to me than other people. I see a trail of people who are no longer here or no longer there mentally, so you can say it’s good or bad but I think some people got a lot out of it and some people didn’t. I never got what the toilet did to somebody that they had to smash it and that type of thing. I think everybody gets something out of it, for some people it will motivate them and someone who had a bad experience it will give them the excuse that the world’s f—ed up and everyone’s out to get them.

The message that I got, that a lot of my friends didn’t get was that some people just fight to have fights and people pick their battles just to “win” but it’s knowing what is the battle. That’s where people get lost, they get into a lot of fights but they don’t know who the enemy is and what the battle is and what each particular war means.

You said that people get different experiences out of hardcore and punk rock whether good or bad, over the years what have you gotten out of these experiences?

Well it’s been different, specifically doing this [Motorboat Cruise 2015] we’ve been asked for a few years to do this and I just go, “I can’t see myself doing that.” I’m not exactly a social butterfly, I don’t drink and I’ve never done any drugs. The epitome of debauchery is not my forte but I do believe in a challenge and I think in a certain sense, an opportunity. We’re a type of band that some people pigeonholed, fit into one little place and they don’t deviate from that. We’ve done Afropunk, a way different festival, we do different festivals in Europe that go from a skateboarding festival to a metal to a punk. In France we played a festival where we were the only band that had amps, it was an acoustic festival. [Laughs]

So to be able to do that is a great experience, you’re able to meet a lot of people and you’re exposed to a lot of people. An opportunity like here, people say “You did really well” and we did well because there’s a lot of older people that never saw us and thought they didn’t like us but they had an opportunity to see us and they realize, “Oh you know what, maybe it’s different than I thought.” That’s how you change people’s opinion and you actually do it. It’s like when you’re kids and you’re picky about food and you don’t like something but you never tried it. How are you going to know if you like it? That’s the way I bring up my kids, they get excited when there’s something new. A lot of friends who are parents are like, “My kids only want to eat hamburgers.” There’s so many things that are better and once they do that they’re not going to want to eat burgers and if you try to trick them and say, “Hey, these peas are green chocolate” they’re not going to trust you. [Laughs] You try new things and they like it.

Can we expect any new music from Suicidal Tendencies or any of your other musical projects?

One of the good things or bad things nowadays is that, in the old days studios were so expensive and you had to plan everything out and now everybody’s got their own little ProTools so you don’t have to worry about the time aspect. The good side is that you can always create music and write music, the bad side is that music really doesn’t sell and you sit there and go, “I love this song, why do I have to try and sell it?” I think it’s changed in a way where I got three kids and I don’t parade my kids like other people and I just want them to do their own thing. My dad didn’t want to push us to any particular thing, he just wanted to expose us to different things and find something we felt comfortable with. With my kids they have to have their own journey and that’s what life should be about and making sure that they don’t fall off the cliff while they’re experimenting.

Are you finding that your kids are gravitating towards music?

Well unfortunately, my middle son is six and they started back in school and they did the whole, “What does everyone want to be when they’re older?” and kids are like “I want to be a doctor or lawyer” and I remember my teacher saying, “You can’t just be a doctor or lawyer, there’s a lot of school and you have to plan and think about that.” So of course my son raises his hand and he goes, “I’m going to be a rock star” but the funny thing is we don’t like that word, it’s a bad word. I had a little battle with my wife because she wanted to get him drums, he wanted drums and he’s taking pans and so for his birthday he got drums. I was like “Anything but drums” and so his teacher told him he had to practice and he came home from school running around, yelling and screaming and practicing. Yeah, that’s where I’m going to gently guide him in another direction, I hope he doesn’t have anything to do with music. If he really wants to do it then that’s his thing. We go to certain places and he starts singing and running around and people go, “I wonder whose kid he is?” [Laughs]

Check Out Photos of Suicidal Tendencies on Motorboat 2015