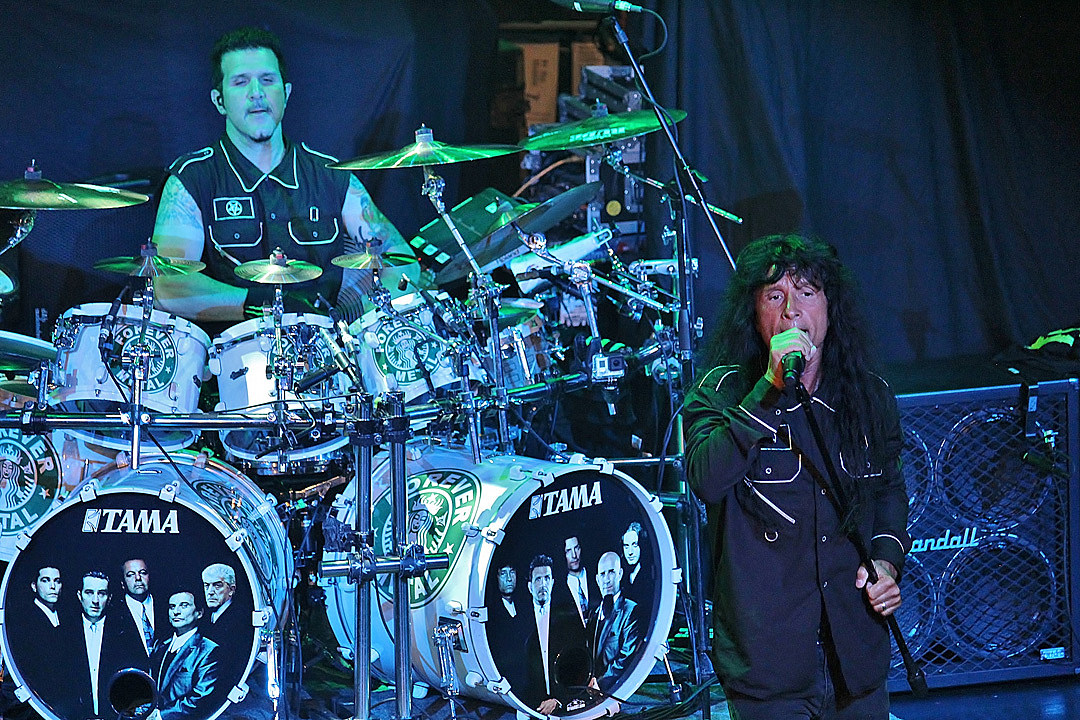 Anthrax fans have been patiently waiting and very excited to see what the band comes out with after their triumphant 2011 album Worship Music. We had the opportunity to catch up with vocalist Joey Belladonna and drummer Charlie Benante on this year’s Motorboat Cruise to chat about the band’s forthcoming album, which we’ve since learned will be titled For All Kings and will arrive on Feb. 26. Belladonna and Benante discuss what fans can expect from the forthcoming disc and also big touring plans next year. Check out our interview with Joey Belladonna and Charlie Benante of Anthrax below:

What can we expect from the new Anthrax album?

Joey Belladonna: It’s definitely heavier. You got to take a couple listens, you need to listen to it a little bit.

CB: There’s a good variety of songs on the new record. I think some of it really goes back to our thrash roots and some of it goes more modern.

JB: Yeah, there’s a lot of everything on it.

Was there any pressure for you guys while creating this new material following the success of Worship Music?

CB: I think there was a little bit.

JB: I try not to think about it, you just go in there and do it.

CB: I remember I was in California, this was going back a long time ago and I met up with Scott [Ian] to get together the first time and we just talked about things and I think we felt a little pressure. I don’t know, we had no expectations with Worship Music and then people liked it and it was really well received — I guess with that it does and you try to top your last one. I think if you go in with that attitude and try to make the best record you possibly could then you succeed.

JB: It’s so hard nowadays, you don’t know what people are going to think, people have a lot of different ears and opinions on how it’s supposed to go.

CB: Exactly, a lot of people on the boat are metal heads and if you don’t cater to exactly what they want, sometimes if you don’t deliver the goods they get a little weird.

JB: As a band you want to be able to do a few things that you haven’t done, too, and sometimes it may drift, not intentionally.

How was the creative, writing and recording process for the both of you?

JB: There was a little more pre-production. Jay [Rusto] was there taking a listen to everything.

CB: I did more demos but yeah Jay was awesome.

JB: For me it was the same. Me and Jay went in there and we had a good time doing it, it was nice and easy no pressure.

CB: The best part about the record, I think is going into it, I heard Joey’s voice with the material so when it was written we already knew how it was going to be. It was really helpful and inspiring to have that.

JB: The variety on this record, I don’t even know, I have to let some people listen to it and start deciding.

You guys are supporting Iron Maiden over in South America in March 2016. Will you be touring with them in the States?

JB: I mean there’s always a good chance. We’ll be touring pretty heavy next year, there’s a lot of openings.

What can we expect from the both of you for the rest of the year?

CB: There’s a Spreading the Disease 30-year anniversary [disc] and it’s funny because we played four songs last night from Spreading the Disease and it was really good. I just think re-visiting those songs sometimes is really exciting. A lot of fans were like, “I never heard that song live before, I’m so happy you played that!” I went to see Rush and they pulled out some rare s— and I was so happy to hear that so you kind of have to understand it.

JB: Even though some of those [Spreading the Disease] songs might not be one of those live songs with big anthems, it’s nice in the set. I watch people and you can tell they were grooving to it and head banging to it.

Our thanks to Joey Belladonna and Charlie Benante of Anthrax for the Interview!

You Think You Know Anthrax?

Check Out Photos of Anthrax on Motorboat 2015