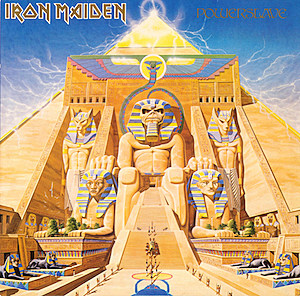 The heavy metal community was already in the grip of Iron Maiden fever when the band released its fifth studio album, Powerslave, on Sept. 3, 1984. Ever since 1982’s The Number of the Beast, Maiden proved to be one of the most exciting and intelligent bands to emerge from the New Wave of British Heavy Metal. By the time they released Powerslave, their mascot Eddie the Head was almost as well-known to fans as the musicians themselves, and the band took full advantage of their audience’s affection for Eddie, adorning the undead figure in an Egyptian headdress reminiscent of King Tut and featuring his cartoon image on art work for the propulsive singles “2 Minutes To Midnight” and “Aces High.”

But what really made Powerslave a masterful release was the work of bassist and songwriter Steve Harris, who penned four of the eight songs, including the majestic “Rime of the Ancient Mariner,” a nearly 14-minute-long recasting of Samuel Taylor Coleridge’s epic poem of the same name. The song featured numerous movements and quoted several lines from the original, including, “Water, water everywhere and all the boards did shrink/ Water, water everywhere nor any drop to drink.” The song was Maiden’s longest number for many years until the band released the 18-minute track “Empire of the Clouds” on its 2015 album The Book of Souls.

For the album, Harris wrote songs about a variety of subjects – the mythology of ancient Egypt (“Powerslave”), world war II fighter pilots (“Aces High”) the arms race (“2 Minutes to Midnight”), the futility of Western-style gun battles (“The Duellists”) and the aforementioned Coleridge poem (“Rime of the Ancient Mariner” – in order to give listeners a new perspective on the band that stretched far beyond tales of vengeance and the occult.

“Steve says that if he hears again that we’re stuck with stories about Satan and other things, it’ll mean that people will never understand Iron Maiden,” vocalist Bruce Dickinson told “Metal Attack magazine in 1984.

Iron Maiden started working on Powerslave in February 1984, and wrote songs through March when they entered Compass Point Studios in Nassau, Bahamas, with producer Martin Birch. The band finished recording its tracks in May and mixed the album in June at Electric Lady Studios in New York City.

From the moment they started recording, the band knew they were creating something special. “Powerslave has the power and energy of a live album,” Dickinson told Metal Attack magazine in 1984. “That is why it is great. [Drummer] Nicko [McBrain] brings in a touch of technicality that’s absolutely fantastic. He plays fast and accurate and we sound better than ever.”

After finishing Powerslave, Iron Maiden met in Ft. Lauderdale, Fla., to start rehearsing for the World Slavery Tour, which featured a multilevel stage set that mirrored the key visual elements of the album artwork. The first gig of the tour was in Poland in August 1984 and the shows ran through late 1995 in California. Audio and video recordings were made at shows in the Long Beach Arena in L.A. and the Hammersmith Odeon in London. The best moments of the concerts were edited together for the album and video “Live After Death,” one of the most well received live metal albums of all time.

Powerslave debuted at No. 21 on the Billboard album chart and, like Number of the Beast and Piece of Mind, it eventually went platinum. In 1995, Iron Maiden reissued the album with a bonus disc that contained the B-sides of the singles: “Mission From ‘Arry” a cover of Beckett’s “Rainbow Gold,” a cover of Nektar’s “King of Twilight” and a live version of “The Number the Beast.” Powerslave received a second re-release in 1998 with a disc featuring the videos for “Aces High” and “2 Minutes to Midnight.”