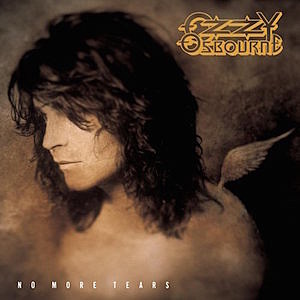 At a time when heavy metal forefather Ozzy Osbourne was struggling with sobriety and working with a new production team, he released one of the most successful albums of his solo career. No More Tears, which featured blazing performances by guitarist Zakk Wylde and four songs co-written by Motörhead frontman Lemmy Kilmister, came out on Sept. 17, 1991.

During the beginning of the songwriting process, Osbourne was drinking heavily and feeling pretty productive. “[When I wrote] ‘No More Tears’ I was absolutely drunk out of my face and I came up with that riff. And it worked!” he said in a promotional interview.

Then, partway through the process, after 24 years of heavy drinking, he decided to get sober with the help of a therapist. He succeeded in his efforts, but seeing the world through clear eyes for the first time in decades was frightening and he felt insecure through much of the creative process.

Thankfully, he had guitarist Zakk Wylde to co-write all but one of the songs on the album. Ozzy’s singing performances varied from anthemic on “I Don’t Want to Change to World” to sinister on “Hellraiser” and heartfelt on the tear-stained ballad “Mama, I’m Coming Home.” Ozzy worked on the record with producers Duene Baron, John Purdell and Tom Fletcher, who gave the guitars and drums a heavy edge, while drawing out the multitude of melodic hooks. “Zombie Stomp” with its tribal beats and Zeppelin groove offered another side of the multifaceted rocker.

As good as the songs were, Osbourne was unable to recognize his accomplishments. “I’m five months sober, and it’s very difficult,” he told Guitar Word. “I don’t know whether [the record] is good or not.”

Even if Ozzy was unsure about the album, the band’s fans embraced it and shortly after its release the title track climbed the charts, hitting No. 5 on Billboard’s Mainstream Rock Tracks. But it was “Mama, I’m Coming Home” that took the album over the top, reaching No. 28 on the Billboard Hot 100 singles chart and No. 2 on the Mainstream Rock Tracks. By Nov. 12, 1991, No More Tears went gold and by Dec. 16 it was platinum. In May 2000, the album was certified quadruple platinum by the RIAA.

Once Ozzy sobered up he was able to look back at No More Tears in a new light. “It’s one of my favorites,” he told Guitar World. “Every time I put a new band together, it gets to a certain point where you know each other and you’re sure of each other. After recording and touring together for a few years, Zakk and I were at that point. And everything fell into its right place.”

No More Tears wasn’t without its drama. The album marked the final appearance of bassist Bob Daisley and drummer Randy Castillo. The former rubbed Osbourne and his wife Sharon so raw that when Ozzy reissued his first two solo albums, Blizzard of Ozz and Diary of a Madman, he hired Robert Trujillo to re-track the bass parts.

Also, after recording the album, Ozzy announced that the tour to support it would be his last. He dubbed the outing “No More Tours.” It should have been a rousing farewell to an industry giant. Instead it became a pain in the, err, ankle.

“Ten gigs into the tour, I was training [to get in shape],” Osbourne told a radio interviewer. “[Then I] jump on the stage and break my ankle. And all the years when I should have broken my neck falling down flights of stairs and out of windows and crashing through plate glass I walked away unscathed.”

Of course, following the No More Tours tour, Ozzy had a change of heart and decided he wanted to keep playing shows. And in 1996, following the release of Ozzmosis he launched the well-received “Retirement Sucks” tour.

See the Yearbook Photos of Ozzy Osbourne + Other Rockers

You Think You Know Ozzy Osbourne?

New Solo Album Is ‘Something Ozzy Has Never Done Before’