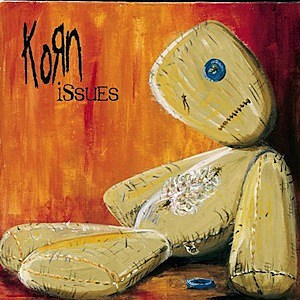 The end of the ‘90s was a time of healing for Korn vocalist Jonathan Davis. After a decade of indulging his most dangerous and depraved rock ‘n’ roll fantasies and suffering a breakdown at the end of the ride, Davis decided to get sober and tone down his extracurricular activities. In conjunction, Korn hired dedicated studio producer Brendan O’Brien to help them stay focused and work at peak efficiency. The resulting album, Issues, came out on Nov. 16, 1999, and kept the band on an upward career arc.

“I think Brendan was really important for helping us achieve the sounds we wanted on this record,” guitarist James “Munky” Shaffer told me in 1999. “”He’s a workhorse and we needed someone like that to motivate us.”

As on their 1998 commercial triumph Follow the Leader, Korn maintained their core heaviness while incorporating a barrage of quirky guitar hooks and irresistible vocal melodies. And once again, the band hit a nerve through a combination of staccato, down-tuned guitars, booming funk-driven bass lines, tortured vocals and experimental electronic embellishments.

“When we’re working on something, our only goal is it’s gotta be great and it’s gotta still sound like Korn,” Shaffer said. “That’s the most important thing.”

“We’re not gonna go off in some wacky new direction,” agreed fellow guitarist Brian “Head” Welch. “When you listen to this record, you’re not gonna go back and ask, ‘F— man, who the hell is this?’ You’re gonna get what you wanted to hear.”

Perhaps Issues is best described as a variation on a theme. “Falling Away From Me” mined the same brooding, spacey territory as Follow the Leader’s “Freak on a Leash,” while “Hey Daddy” resurrects terrifying themes first addressed on Korn’s “Daddy,” and “Beg for Me,” which shifts from a creepy party song to a nightmarish demolition fest, is redolent of Life is Peachy’s “Swallow.”

“We wanted totally heavy, killer guitar riffs that were kinda weird, but really slamming,” Welch said. “And they had to have a groove. That was really super important.”

Lyrically, Davis addressed the mental anguish he was in before he got sober and started taking antidepressants. In “Beg for Me,” he screams, “Everyone is looking at me / I can’t get out of bed there is evil in my head / Everyone just let me be.”

“I was taking the weight of the world on my shoulders and I started breaking down and freaking out,” Davis said. “I stopped drinking because I thought it would make me feel better, but it didn’t, and that’s when it really started to scare me. I stayed in bed all the time because I couldn’t deal with the world.”

He added, “I wouldn’t eat because I’d be afraid germs were gonna kill me. I lost a lot of weight. That’s when I went to a doctor and he gave me some drugs. At first, I was afraid to take them because I didn’t know what they would do to me or how they would affect my creativity. Then I started taking them and I felt so much better.”

Shaffer, Welch, bassist Reginald “Fieldy” Arvizu and drummer David Silveria started writing songs for Issues in early 1999. In June, they entered the rehearsal studio with Davis to fine tune the material and the following month they began recording with O’Brien at A&M Studios in West Hollywood, Calif. It took approximately three months to track and mix the 16 songs on the record.

“There were times when we second-guessed ourselves,” Davis said. “But when we heard the final mix we were all smiling and laughing. We f—ing loved it. It’s harsh and brutal like a lot of our stuff, but we were really happy with the songs.”

The day before the album was released, Korn played Issues in its entirety at a special show at the legendary Apollo Theater in Harlem, N.Y. The show was a celebration of the joy they felt having completed the album, and the band was accompanied onstage by a choir and the New York City Police Department Pipes and Drums section. Coming at the heart of the nu-metal revolution, Issues debuted at No. 1 on the Billboard album chart with more than 500,000 copies sold in its first week of release. The disc has gone on to sell more than 5 million units in the United States alone, and a total of 13 million worldwide.

While Davis remained clean and sober in the wake of the success of Issues, other band members saw their popularity as an opportunity to up the ante on their rock ‘n’ roll indulgences, causing friction and turmoil that peaked years later with the departures of Welch and Silveria.

You Think You Know Korn?