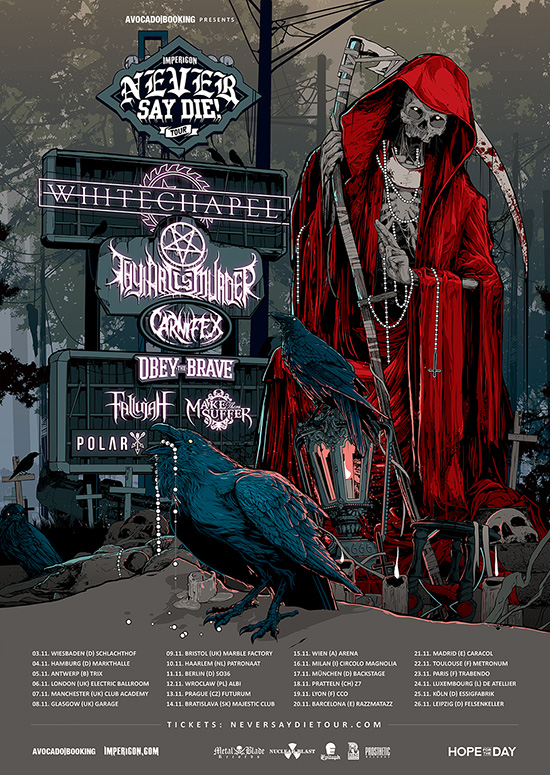 Never failing to deliver a stellar line up of genre pushing, ground breaking bands at the forefront of the hard-hitting music scene, Avocado Booking are excited to present their heaviest line up yet for the ‘Impericon Never Say Die Tour 2016‘. Now in it’s tenth year the festival continues to go from strength to strength serving as a benchmark for the heavy music scene worldwide.

With five genre-redefining albums to their name, WHITECHAPEL have carved themselves a unique niche in contemporary metal, and in doing so have gained legions of fans. Their reputation for maintaining their integrity is well earned, and going into their sixth full-length this commitment is stronger than ever. With their new album ‘Mark of the Blade‘ coming June, 24th, the band is truly stepping into a new and exciting phase of their career.

“We are excited to return to Europe this fall with our new record and headline Never Say Die! 2016. We love Impericon and the Never Say Die! Tour so we’ve been looking forward to this since it was offered to us. The line up is solid and heavy so don’t miss this tour!” says Alex Wade from WHITECHAPEL!

WHITECHAPEL will release their sixth full-length, ‘Mark of the Blade‘, worldwide via Metal Blade Records on June, 24th. Pushing their sound forward with each successive release, ‘Mark of the Blade‘ remains true to the band’s roots while venturing into previously unexplored territory, both sonically and lyrically. For a preview of the album, the latest single, ‘The Void’, is now streaming via EMP!

For another preview of ‘Mark of the Blade‘, the title track can be heard at: metalblade.com/whitechapel – where the record can also be pre-ordered in various formats.

Reunited with producer Mark Lewis (The Black Dahlia Murder, Cannibal Corpse), WHITECHAPEL has redefined who they are and what they are capable of with their new album, ‘Mark of the Blade‘. Kicking off with “The Void” – which has a Slayer-esque ferocity that is perfectly suited to the band’s three-guitar attack – the songs that follow all leave a distinct impression, and by the time the rich, dark melodies on “Decennium” bring the record to a close, it’s impossible to deny the emotional weight brought to bear. “It’s the most dynamic record we’ve done, in the sense that one song can be very aggressive while the next one will be softer and sentimental,” guitarist Alex Wade asserts. “At this point in our career and as we grow older, we are taking a more open-minded approach to creating our music, allowing what we think sounds good to evolve naturally, rather than to just write what is expected of us.”