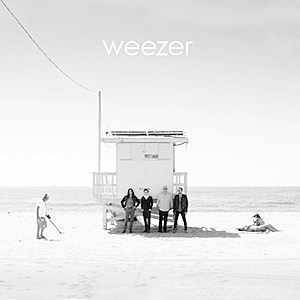 Weezer have just revealed the release of their 10th studio album. Their fourth self-titled disc to be named after a color, Weezer’s White Album, is set to drop on April 1.

Weezer have already released the singles “Thank God For Girls” and “Do You Wanna Get High?” from the White Album. Now, with the record’s release details, Weezer have shared a new video for “King of the World.” The video is undeniably charming as it depicts a fairly un-regal king causing trouble down a California boardwalk.

“The inspiration behind the songs were my experiences hanging around the Westside of Los Angeles, which has been our home since Weezer began,” says frontman Rivers Cuomo. “Hanging out with people in Venice and Santa Monica, the beach, the Hare Krishnas, the Sikh on roller blades with the guitar, girls on Tinder within a 4 mile radius, seeing other bands, the kids from La Sera. I would just tweet out ‘does anybody wanna hang?’ and then I’d get together with people who responded and talk about life. I love California. I wanted the album to make you feel like you were there with us SoCal weirdos even if you’re in Milwaukee in December.”

Weezer have also announced a co-headlining North American tour with Panic! at the Disco. Andrew McMahon in the Wilderness will provide support. Check out the full list of tour dates below.

Weezer will appear on the NBC comedy series Undateable tonight at 8PM ET. You can also catch the band on ABC’s Jimmy Kimmel Live! on Jan. 19.

To pre-order a copy of Weezer’s White Album, head over to the band’s webstore.

Weezer, ‘King of the World’