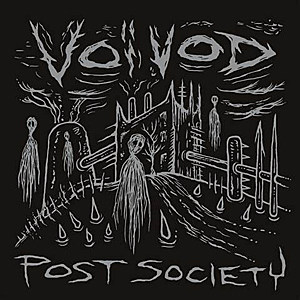 Prog metal vets Voivod are making sure they’re busy to start the new year. The band has just announced plans to release a new EP called Post Society on Feb. 26 and they’ve added more dates to their early 2016 tour schedule.

Post Society is a five-track set, led by the title cut, and it comes with artwork done by the band’s drummer, Michel “Away” Langevin. In addition to the title track, fans can embrace the songs “Forever Mountain,” “Fall,” “We Are Connected” and a cover of Hawkwind’s “Silver Machine,” which fill out the disc. The EP marks the first new music from Voivod since their thirteenth studio album, Target Earth, arrived in 2013.

Langevin stated, “More songs from out in the woods! In between tours, we are steadily finding our way through recording the next album at RadicArt studio. Many riffs were composed on the bus but until the North American tour with Vektor in 2016, we will spend most of wintertime in Montreal writing another batch of material. Meanwhile, we hope you will enjoy this EP of good old thrash-prog-punk-metal or whatever people want to call Voïvod nowadays :)”

Voivod will be hitting the road in February to start support of their new music. Dates begin Feb. 6 in Providence, R.I. Vektor, Eight Bells and Black Fast will all spend time in support slots on the run, which concludes March 5 in Hamilton, Ontario.