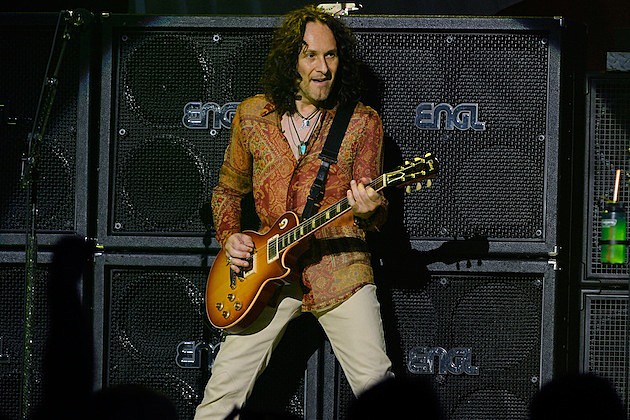 Def Leppard and Last in Line guitarist Vivian Campbell has been battling Hodgkin’s lymphoma since June of 2013, with the cancer going into remission twice, only to come back shortly after. Remaining in good spirits, he has joked about his hair loss and has kept touring over the last couple years. Currently taking an immunotherapy drug as treatment, the axeman will have to wait it out to determine if the drug is having any positive affect.

In an interview with WZXL, Campbell discussed his ongoing battle at length. When asked about his treatment, he revealed, “Immunotherapy. Yes, I’m taking this drug called pembrolizumab. I’m part of a Phase II clinical trial. I don’t actually know if it’s working yet, to be honest. I’ll find out in early December.”

Explaining the reason behind the wait, he continued, “‘Cause right after Thanksgiving, we do another set of scans, and that’s basically the determining time. My doctors and I are gonna sit down and have a look at that and see if it’s holding the cancer at bay or shrinking the tumors. And if it is, I’ll be able to continue this treatment for a couple of years, which will be the best possible outcome, ’cause then I’ll be able to continue to work for a couple of years.”

His cheerful optimism is grounded with the reality that the treatment may not work as desired, adding, “If not, then, you know, I’ve gotta reconsider my options. But I’m hopeful, you know — fingers are crossed. It’s been great to be able to do that. I started doing this treatment six months ago, and it’s been fantastic, because it meant that I was able to continue working, you know, as opposed to doing a more traditional treatment like radiation or something, which would have meant I would have had to miss the tour.”

Going on to express that music has been a huge force in helping him in this battle, the guitarist said, “And work, for me, is catharsis, you know. It’s very important to me to be up there onstage doing it, and that’s what keeps me alive.” When asked about music being therapeutic, he expanded on this notion, exclaiming, “I couldn’t imagine anything worse than being at home. You know, when I first got my diagnosis, the guys in the band, you know, obviously, out of genuine concern for me, they said, ‘Well, you know, you don’t have to go on tour if you want. Just stay at home and look after your health.’ And, to be honest, I couldn’t imagine anything worse, you know [laughs].”

Def Leppard have had a rigorous touring schedule this year and Campbell also feels the fire from playing with Last in Line [comprised of former Dio members Vinny Appice, Jimmy Bain, and Claude Schnell along with singer Andrew Freeman], playing material from the first three Dio albums, all of which featured the six-stringer. He said, “I’ve gotta be out there and doing it. And particularly with the Last in Line stuff. I mean, like I say, it’s really cathartic to pick up my Les Paul and get angry with it again, like I did when I was in my twenties. That makes me feel really, really good.”

Def Leppard just released their self-titled album on Oct. 30 through earMUSIC and will be touring the U.S. with Styx and Tesla in early 2016.