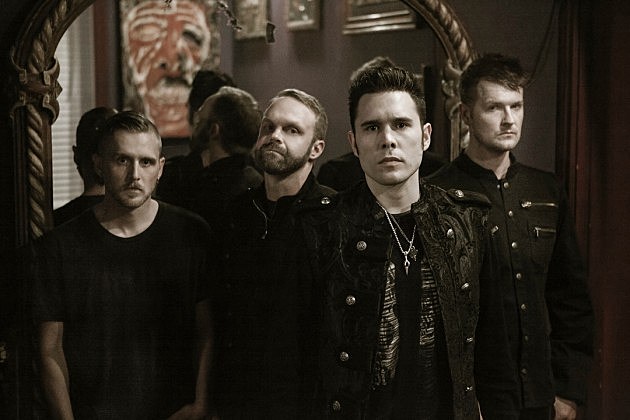 Loudwire recently had a chance to talk with Trapt frontman Chris Taylor Brown about the band’s upcoming album, DNA. In Part 1 of our interview, Brown discussed the song “Passenger,” as well as his recent online outbursts and altercations with other bands. In Part 2, below, he speaks about politics, the band’s new single “Human (Like the Rest of Us” and the band’s tour plans. Check out the chat below.

I’ve been noticing some of your posts, the discussion on the Bernie Sanders minimum wage plan, the re-education of the work force. I’ve seen musicians go and do things in politics to various degrees. Have you thought about getting more involved at some point?

To me, it’s just about having as much pride in every American as far as like, where they are in life and what level they want to reach as far as their dreams go. Then, everybody in America, kinda looking at each person and going, “Hey, I want to help you realize your dreams because people helped me realize mine everyday because our fans are so awesome.” For me it’s just that giving back, and just going, “What can we do to help people realize their dreams?” That’s really all it is. To be as proud of your fellow worker, fellow workforce of America as you are of your military.

I feel like, having the strongest most highly skilled workforce in the world is probably more important than having the biggest and strongest army in the world. I think that’s what keeps the peace, people having a good job and being happy and having the ability to have families. I think that’s more important than having the strongest army in the world. I think you already will have that if you have all these peoples kicking ass in your country, making money and being happy. They can afford to at least pay their military, or policemen as much as they need to need to be paid to do their great job. I think it all starts with the opportunities that are available in America and how much you help them achieve those. I think that has to be a concerted effort between all Americans, to try and make each fellow American as strong as they can be in every way.

“Human Like the Rest of Us” is the new single. Tell me about where that song came from.

That song, I see a lot of division in America. That’s what a lot of the themes are in DNA. Just a lot of division. Our motto of this country is “United We Stand, Divided We Fall.” That’s so true but if we continue to splinter into different groups based on race, religion, sexual orientation. We will never unite and make each other better, it’s just not going to happen. We’re going to fight each other all the time. If you’re in a band and everyone hates each other, everyone wants to hide in separate dressing rooms, you’re not going to be close enough to make a great album. It’s not going to happen. So I feel like the same exact thing in America.

Unity is the main theme. Human like the rest of us, human above all — your heart bleeds, you’re made of flesh and you’re vulnerable. One day we turn to dust. What makes us human is the emotions we feel and a big part of that song is all that stuff I went through with feeling like I wasn’t going to get to the next step, because something got put in my way that was going to keep taking that from me. That’s how I felt for so long and when I came to terms with being numb for that long, that song came out.

It was like, hey man, you don’t need to be down on yourself for that. That is what makes you human. Sometimes you just don’t want to feel, because you’re too … you have all this in you and it’s hard sometimes to grasp it all. You obviously want to feel good as much as you can, but the pain that you feel is … when you get to the other side, that’s how much happiness you’re going to feel. You’re going to feel like you got through something that maybe a lot of people wouldn’t have gotten through or just that you yourself are strong enough to fight it and get through it. I think that that’s what I want.

I’d like to see America embrace each other regardless of race, religious or sexual orientation and just say, what do we all want to do? We all want to be happy. So let’s help each other become, and get happy as we can. To get as fulfilled as we can, not just be happy. But work hard and be fulfilled and have the opportunity to work hard. That’s what everybody wants. That’s what minimum wage gap, OK, double it in a few years but then what? Do it again, and again? It doesn’t end. America has never really done crazy things with the minimum wage. It’s only gone up like, $4 in the last 35 years. We don’t want to strive for that, we don’t want to strive for putting a bunch of people in minimum wage jobs, or make it that comfortable in any way. I think that’s the whole point of being at minimum, is that it’s a temporary thing.

Nobody I know, as far as our fans, and when I say stuff like I don’t agree with that kind of thing, it’s just because I see so many hardworking fans and even when they’re like, “Hey I’m working a night job and the minimum wage sucks but I know I’m going to find something better. When I do, I’m going to be proud of myself. I want that opportunity to be proud of myself. I don’t want it to be given to me.” I see that a lot. It’s really inspiring to see that and hear people make comments like that. It’s amazing.

I just think, a lot of people go, “Well everyone’s leaving me behind. No one cares about my struggles.” That’s not cool either. In the end, I think it’s just everyone needs to really push each other to be the best we can be. I know it’s easier said than done, there’s so many people who will hate that. They don’t even want to be in that place where they might want to have love and shit. That’s unfortunate. But if you got an artist out there, celebrities and stuff, make that choice to say, “Hey, let me do what I can do to rally people to be just as proud of a fellow worker as we are of middle class America.” I just think we need to feel like each one of us is a soldier trying to achieve our dreams. We should help each other do that.

I know the album DNA is the final stages. We’ve heard a couple of tracks so far but what’s another song that stands out to you that you can’t wait for people to hear?

I can’t wait for people to hear the song “Tangled Up In You.” It’s more of a ballad, like more contagious and stuff like that but it’s got an edge to it for sure. It’s just about, at the end of the day, i think we all want love and we want to find that in someone else. It’s good to have friends, brothers and sisters but I think we’re all looking for one person that we can share our deepest thoughts with and get as close as you can to somebody without being them. That’s what that song is about and it’s really great, we’re playing it live. It’s just a real emotional song. I think people are going to dig it. Like I said, the album is about emotions.

When are we looking for the album to come out?

Right in the middle of October.

I know you’re on this tour with Sons of Texas right now, but is there anything coming up in the fall or anything that you want to promote on the horizon?

Yeah – we’re going to be doing a big tour in the fall. October and November into December. DNA tour. It’s going to be a real cool, live stage thing where we’re basically showing the dichotomy of parts of America that are kind of run down and people always wanting to avoid them. There are people who live in those areas that feel that way too. They get angry and I see why they could get angry. There are places in America that are beautiful and perfect, almost utopian. I’d like to see a concerted effort from people who are in higher level positions or is in a place that maybe has more investment or attention paid to it over the years, the last 100 years and go, “You know what? Instead of driving everyone else away from us, let’s see what we can do to make the other parts better or just as good.”

Obviously this is all idealist thinking for me, but I feel like if everybody wanted this, it would get better. It doesn’t have to get that much better, it just has to get better. That’s it. I think it all ties into being unified as a country and not being divided and not letting certain things and certain actions by a few people blanket everybody into being a certain way. I think that’s the wrong way to look at it.

There are isolated incidences and there are people who make mistakes. Sometimes horrible mistakes. It’s not what everybody thinks. It’s not the whole. It’s not how everybody feels. I think it’s just that you need leaders. You need leaders in politics and government — civil rights leaders, musicians and celebrities, actors — whatever, people who are seen talking. There are so many things we need to step up on as fellow human beings and Americans. For that matter, all around the world. It would be awesome to see that, to see people wanting to help each other — just help each other and really their dreams. That’s so much more important than keeping someone alive or someone just going at the bottom level. I don’t think we should strive for minimum, I think we should strive for maximum. Let’s help each other do that, that’s the main thing. Looking at your neighbor, how can you help him? Some people say, “Hey I’m just trying to help myself here,” and that’s cool. Do that. Help yourself first, get to the point where you feel like you can help someone else but when you’re at that point, where you feel like you can help someone else it’ll do no good.

See what that guy is dreaming. That guy might want to be an actor, maybe you know a friend and I do, I know some fiends – they come to my shows. I’m like, “Oh really? No s–t, I know guys who produce horror movies.” I call him up, and he got an acting gig on a movie. You can’t do that every day, but just little things you can do at any time for people who want to work, be a tech and rise up in that. We pride ourselves in trying to do that for as many people as we can. The guy we first had as a guitar tech is now doing America’s Got Talent, and I love seeing that. I don’t want him to keep working for Trapt, I want to see how high he can go.

Many thanks to Trapt’s Chris Taylor Brown for the interview. Keep an eye out for their DNA album and look for the band on tour at these stops.

Watch Trapt’s “Human (Like the Rest of Us)” Video