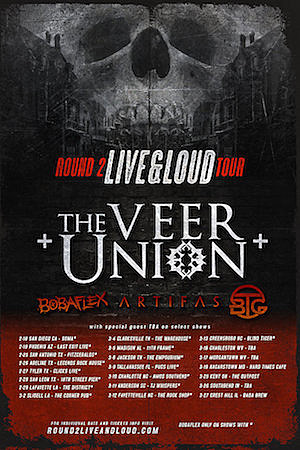 Round 2 Live and Loud

Get ready for one of the hardest-hitting rock tours of early 2016! Punchy rock anthem writers the Veer Union will be out in full support of their forthcoming album Decade, which will mark 10 years since their debut record was released. Kicking the “Round 2 Live and Loud” trek off on Feb. 18 in San Diego, Calif, they’ll have Bobaflex, Artifas and Bridge to Grace in tow to round out the support slots as they traverse the southern half of the country.

With the Veer Union promoting their 2016 release, the rest of the lineup will continue to tout their latest albums, all released in 2015. Bobaflex are on their sixth album, Anything That Moves, while Artifas and Bridge to Grace are relative newcomers, debuting with Inhuman and Origins respectively. Extending to both coasts, the can’t-miss tour will undoubtedly feature raised lighters, fists and crowd participation sing-alongs.

For those who have seen the Veer Union before, the band will be touring with new faces since their 2012 release, Divide the Blackened Sky. The entire lineup has been revamped save for lone constant, singer Crispin Earl. The latest addition came last year with drummer Tyler Reimer replacing Neil Beaton.

Watch the Video for the Veer Union’s ‘Defying Gravity’