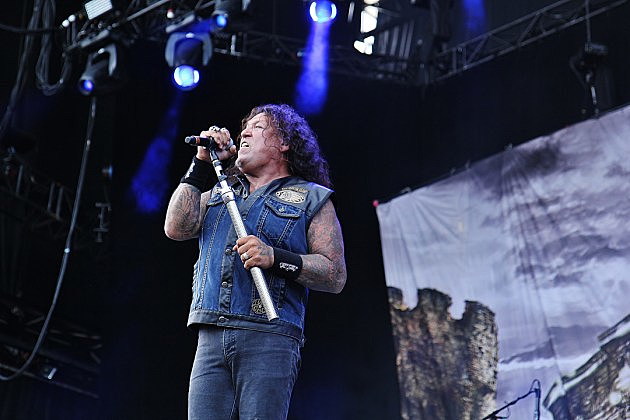 Testament‘s Chuck Billy was the guest on Full Metal Jackie’s weekend radio show. The vocalist stopped by to discuss their new tour with Slayer and Carcass, the band’s progress on their next studio album and more. Check out the chat below.

How ya doin, Chuck?

Happy to have you back. Testament, on tour with Slayer starting February 19 through late March. What a killer lineup on this tour!

It’s a wonderful way to start the year off, ain’t it?

There’s very few tours where they are announced and you’re like, if you’re having a drink it was ready to come out of your nose or you spit out your food. That is an awesome bill. Carcass is on the bill as well.

Chuck, you’ve sustained a long respected career with Testament. Which do you feel is your greater responsibility to share with young new bands — musical experience or business knowledge?

It’s a little bit of both, these days. The record deals aren’t what they were in the ’80s. But I always tell new bands, what advice can you give me? It’s always trying to, especially these days with the Internet and where to get your music out there, is to try and retain the ownership of your music. Keep control of your music. There’s a lot of people who are looking to get signed just to get signed, but then they regret it because songs are gone, they don’t get paid and it turns out to be a bad deal. Sometimes it doesn’t work out.

What does the exhilaration of stepping up to a mic and letting loose that energy feel like when you’re in the studio?

The studio is so unforgiving because you hear everything so perfectly. [laughs] It gets a little monotonous. I get more comfortable, especially after doing so many recordings now that I look forward to it because for me, singing it live, it’s definitely a much more powerful vibe. The vocals are more intense and the songs are on the records come across different. In the studio, for me, I get a chance to use three different kinds of vocal tones whereas the last record, we did that ballad. There’s a voice I did on that that I haven’t used in a while either. So, getting into the studio I wouldn’t have did that if I wrote the song live and started playing it live, but until I got into the studio and did that that’s when I really found like, whoa, this is doing something different.

The new album is the eleventh Testament studio album. With so much experience making albums, what keeps you open minded to learn new things about the process of making music?

I’ve been fortunate, because Eric [Peterson] has always been the writer where he doesn’t listen to a lot of other stuff. He’s really into his own thing and I don’t ever – well I do know that whenever I’m going to get a new song from him, don’t expect just the last record or what we’re writing. He’s always kept me on my toes and the band sounding fresh because we’re not playing the same record you just bought and heard. It’s got a different flavor to it. I’ve been fortunate to be able to do that with Eric and having doing it so long that we can still have fun and enjoy it when it comes time to do that process.

Chuck, what might surprise people about how your personal taste of music has changed since you were younger?

I don’t know if it’s changed, because I still listen to the bands that I listened to growing up wanting to be a guitar player when I was younger listening to bands like UFO and Michael Schenker was my hero, early Scorpions — Uli Roth. I still revert back to that stuff because for me, that just takes me back to the good ol’ days when I was still living at mom’s house and had no bills and no worries, [laughs].

Testament are going to be touring with Slayer and Carcass this year. What goes into preparing to go on the road musically, logistically and personally?

I’m sure as you know there’s a lot, coordinating just everything from all personnel to the bussing to the hotels, where the driver stays. There’s a lot that goes into it. But, after years of doing it you have your routine. You have certain companies you work with. It gets a little easier. There’s a lot going into it, especially preparing musically for a tour like this. We have an eight-song, forty-minute show so it gets very difficult to decide what we’re going to play. We’re still in that phase right now but I think we’re going to definitely come out with some stuff that’s like, current and then go back early classic.

I’m excited about this tour and for what’s to come with Testament. Can you give us some sort of timeline on the new album?

We’re into it right now. Eric [Peterson] and Gene [Hoglan] just tracked a single this last weekend and we’re working on getting a single out for the tour first, to get everybody a taste of what’s going on. As soon as that Slayer run is done, we go right into the studio until June to get the record finished. So by the time we hit Europe we should have a record mixed and sitting ready to go, hopefully get it out by June or July hopefully.

Chuck, thank you so much for taking the time and looking forward to seeing you out on this tour.

Thanks again, it’s always a pleasure talking to you.

Many thanks to Testament’s Chuck Billy for the interview. As stated, the band is working on new music, so keep an eye out for that. And be sure to catch them on tour with Slayer and Carcass at these stops. Find out where you can hear Full Metal Jackie’s weekend show at this location.

See Where Testament Ranks on the 10 Greatest Thrash Bands